The calendar most of the world uses today is a direct descendent of the one developed by the ancient Romans, but there have been a lot of modifications along the way. For instance, in the days of the Roman Republic, the calendar year was only 355 days long; the Romans knew this was too short, but weren’t exactly sure how long the year was. Twenty-two extra days were supposed to be added into February when necessary, but there was a catch: the Pontifex Maximus, who held Rome’s highest priesthood, decided if the calendar had become misaligned enough from the seasons to make the extra days necessary, and the Pontifex Maximus was always a member of Rome’s political elite. Since a politician’s term of office was the same as the calendar year, a Pontifex Maximus might be prone to add the extra days if he or his allies were in power, or not add them if that would shorten the terms of his enemies. This caused the calendar to become wildly divergent from the natural rhythm of the seasons. Eventually Julius Caesar, who was Pontifex Maximus himself, managed to become absolute dictator of the state, and, based on Greek and Egyptian science, established the 365-day-plus-one-leap-day-every-four-years calendar that we mostly follow today; the situation had gotten so bad that, in order to realign everything, the year of the reboot was preceded by a year that was 445 days long!

This is a long way of saying that, sure, maybe you think that today’s Labor Day, traditionally marking the end of the summer, and that thus we should be moving into Milford’s school year and football season. But nope, that baseball-season plot that we all were pretty sure dragged out over the summer? That was just a really long spring, according to our politco-religious elite (i.e., the creators and distributors of Gil Thorp). Now summer’s here! A summer of beach-centric hijinks! Previous summers gave us Kaz-punching wackiness and Marty Moon getting grifted and senile pro wrestling hijinx, so I’m very much looking forward to whatever we get in the summer of 2016, which, just to make clear, is not over at all, but actually just getting started.

Good to see that Ant-Man Scott is still determined to reject the tired superhero tradition of “secret identities”, and plans to blow Spider-Man’s cover, right here on the subway! Anyway, today we learn that Scott is either such a thorough reader of TMZ that he can recognize the nobody husbands of C-level stage and film actresses, or he’s one of the eighteen followers of the sad, abandoned Instagram JJ Jameson made Peter set up during a manic episode that ensued when he learned what Instagram was. 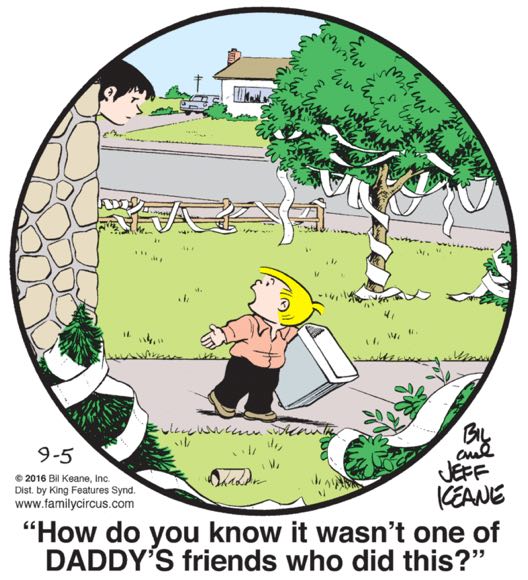 “Think about it, Mommy, it makes sense. For one thing, Daddy has friends.”