I make fun of the Funkyverse visual convention whereby flashback panels are depicted as sepia-toned photographs that look like they’re supposed to be in a photo album, but really, that’s perfectly fine as a quick signal of what we’re looking at, even if, since most of the time periods being flashed back to are well into the era digital photography, it doesn’t really make literal sense. It’s like Microsoft Word using a 3.5 inch floppy disk as a symbol for “save to disk,” or your smartphone using an outline of a classic bakelite phone handset for the app you actually use to make phone calls: sure, it’s kind of goofy, but everyone pretty much knows what it means, and it’s not like I have any ideas for how to do it better.

But unless today’s strip is the result of a complete brain fart over at Ol’ Daily Comics Coloring Central, I’m really at a loss to understand what’s supposed to be going on here. My first thought was that maybe the Starbuck Jones movie is being shot in black and white, for nostalgic purposes, or maybe because it seemed to work for Schindler’s List. But then I realized that of course we’re not looking at the movie itself but the process of filming said movie, so, like, I dunno. Maybe they think this is how you make a black and white movie: by putting all the actors in grey makeup and shooting them against a grey background and grey props. Everyone on set needs to be made up, too. Not a single speck of color can be even accidentally visible! 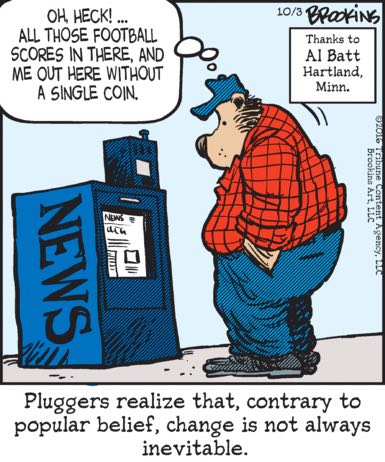 Things pluggers don’t have access to, as near as I can tell from today’s Pluggers:

Guys, have … have we considered that Beetle might be dead?