You know that normally I’d be very in favor of a punchline panel in Newspaper Spider-Man where our heroes mope wordlessly. But as a transit rider and advocate, I must protest against a train ride being used as visual equivalent of a sad trombone. Especially in the New York City region! Why, Peter and Scott will be back home in Queens while Jonah and Hank are still stuck on the Long Island Expressway, Jonah shouting furiously at his driver and other cars while Hank scrunches down in his seat and pretends not to notice.

It’s also obviously way too soon for the first Daily Bugle under J. Jonah Jameson’s new regime to have come out, so I assume the banner headline in the paper Scott is reading is over a story about how New York is now for the first time in years entirely free of Ant-Men. Gonna be an awkward correction at the bottom of page C-12 tomorrow!

It does take some warming up to, but Wadsworth is laying out his people’s philosophy in a nutshell. Vultures don’t believe in fairies or make believe. They believe in each other, and their own ability to make this world a better place for themselves and their families. They believe they’re capable of anything, even getting money when their baby teeth fall out despite the fact that they don’t have any teeth. 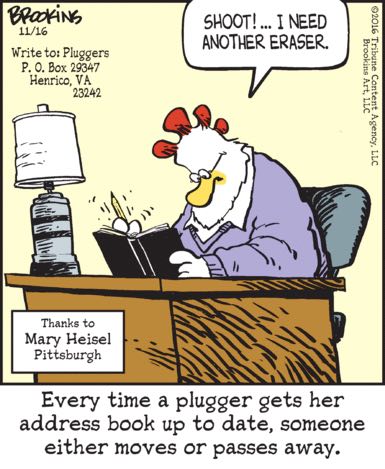 One of the longstanding mysteries of Pluggers can be summed up pretty simply: what is a plugger, exactly? Today’s strip I think encapsulates it nicely: a plugger is someone young enough that they still know people who move and old enough that they know a lot of people who are dying, and also someone who hasn’t figured out that you can put addresses into your computer now.