As is my wont with Gasoline Alley, I have no desire to bring you up to speed on the current storyline about beardy PA Chipper Wallet, and fortunately have no need to either, since nothing happening in today’s strip had any kind of earlier setup. I’m guessing that the strip was tied by some mysterious web of obligation to mention Reg Carter of the PA History Society — like perhaps the PAHS deposited a tidy sum into a certain Swiss bank account controlled by an intermediary shell corporation owned by Gasoline Alley intellectual property holder Tribune Media, or maybe Mr. Carter lost a bet. Anyway, obviously what this transaction needs to make it interesting is a little sex appeal, and what better way to deliver that than to have Chipper’s redheaded assistant practically throwing herself at him? Look at her fluttering her eyelids in panel one. That’s the stuff that gets red-blooded comics readers hot under the collar, I tell you what. The PA History Society’s really getting its money’s worth.

If there’s something funnier in the history of comics than Mark’s pose in panel two here, I can’t imagine what it might be! Since he’s talking, I’m pretty sure he’s not actually running yet, just posing extremely dynamically to impress upon Abbey how very fast they’re going to have to run in order to not suffer an awful death by lava. 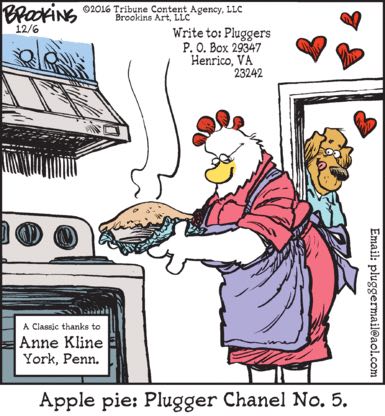 “Nothing gets a dog hornier for a chicken than the smell of fruit pastry” –a nationally syndicated comic panel, apparently