One of the arguments for the idea that advanced alien races visited Earth in the distant past is drawn from our own mythologies. Detailed stories of gods and goddesses, and other beings far more powerful than ordinary men and women, aren’t just made up out of whole cloth, the theory goes; they represent garbled cultural memories of the visits of extraterrestrials. These creatures left such a lasting imprint on our preliterate ancestors that we unconsciously not only remember them but reproduce them in our beliefs and art. And I think panel two is indisputable proof that, tens of thousands of years after it was buried beneath a New Mexico volcano, the Kree Sentinel is still well remembered by humanity: 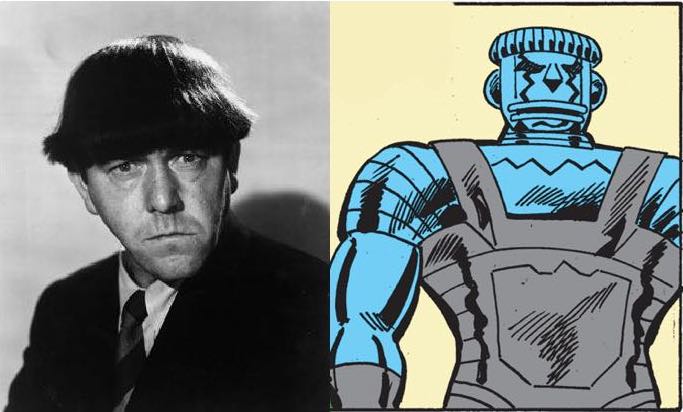 Over in Gil Thorp, Gil is getting in on the Downward Socioeconomic Mobility Sleuthing action, prompted by this extremely respectful student detectives! See, Aaron’s mom used to be in the lucrative actuarial trade, back in sixth grade, so now it makes no sense that Aaron is living in a dumpy apartment complex like a common poor. Gil decided that the best way to get to the bottom of this whole dilemma would be to show up at Aaron’s mom’s office, unannounced, presumably during the workday, when he should be, like, coaching students or whatever, and asking, “Hey, just wondering if Aaron’s OK? There’s not anything happening at home that would upset him? Like the fact that his mother is doing some kind of white collar job in an office with cracked plaster walls, which basically is like a giant sign that says ‘CALL SOCIAL SERVICES IMMEDIATELY’? I’m just asking questions!” And indeed his visit has prompted an extremely productive family conversation at home. Another win for Coach Thorp!

Oh God, in one strip, we have explained so much of what makes Beetle’s character baffling: his seeming narcolepsy, the physical abuse visited upon him by Sarge without consequences, the way he appears fatally mangled in one strip and then back to normal in the next. “Beetle” is really a series of artificial beings, clones or androids or something, presumably being developed by the military to replace all-too-fallible humans in war and create an unbeatable army. The program is … not going well, with none of the Beetles scattered around Camp Swampy living up to expectations. And despite the fact they look like humans and talk like humans and (let’s consider Miss Buxley’s part in this experiment) love like humans, they are not treated as humans worthy of respect. Sarge is no doubt about to pummel this one into goo, like he has so many others, and then go find one that’s actually up and walking around, just like you might rummage through your desk drawers looking for a functional pen.