Haha, well, with June’s suggested plan that Heather fulfill her dreams of motherhood by seducing her manservant foiled by her impending departure to the Old Country without him, we now come to an entirely different set of calculations. I hereby apologize for mocking the new, retooled Rex Morgan, M.D., for making its medical plots about snoozeville issues like sleep apnea and dehydration, since it now appears to be wading into the complex ethical issues over whether a person with dementia can be said to be capable of giving sexual consent. Unless Milton’s medications makes him, um — how can I put this …. prone to masturbating in the hallway, or just wherever he happens to be in the house. Then the whole issue is really just a matter of dexterity on Heather’s part. 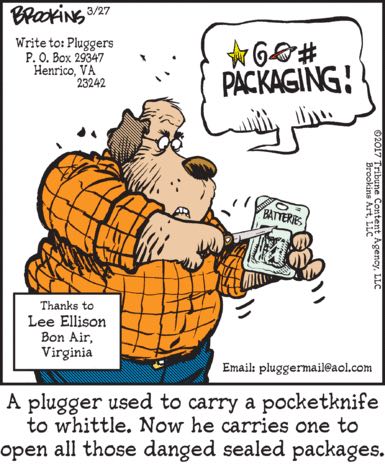 Since pluggers are usually depicted as being mournfully resigned to their lot, no matter how dire, it’s actually a little heartening to see this late-middle-aged dog-man so worked up about something that I too find extremely irritating. Still, I don’t think we need to encourage pluggers to start venting years of built-up simmering rage, especially now that I know that many of them are armed and ready to stab something, anything, whatever will make them feel powerful and alive again.