Ha ha, today’s Mark Trail features not one but two hilarious revelations! Number one is that despite the ill-feelings arising from the infamous Water-World disaster, Mark apparently still calls Lesley Joyce on the regular, like whenever he encounters sea-wildlife of note (“Lesley! Yesterday a saw a shark and it made me think of Water-World! I’m still sorry about your car!”). And number two is that he decided that the best way to leave a breadcrumb trail that would lead law enforcement to his rescue would be to absolutely infuriate Lesley by implying that he worked for her. Actually, I guess the revelation that high-level WaterWorld executives still sport soul patches in the year of our lord 2017 is hilarious too, but that’s really more a “laughing at” than “laughing with” situation.

Wait a minute, are you telling me that Randy Parker spent months in a CIA black site in Macedonia enduring “stress positions,” waterboarding, and other “enhanced interrogation” techniques and we didn’t get to see it? I for one will be writing angry letters to King Features Syndicate and my Congressman about this. 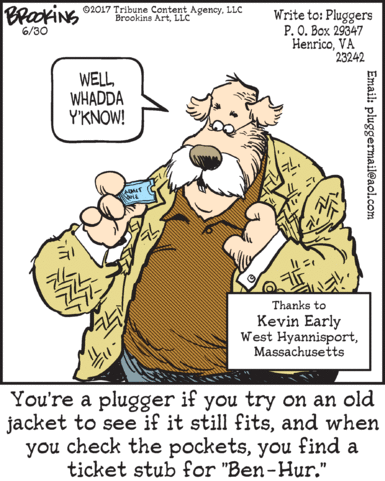 I for one am pretty surprised that pluggers took in some summer movie fare last year! Good for them for getting out!