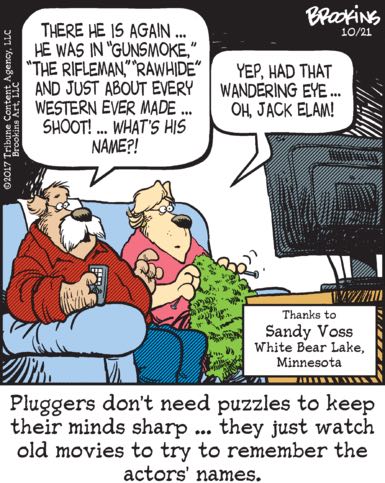 Oh, hey, remember Elam, the extremely unappealing guest character who served as a sexual rival to Rufus in Gasoline Alley a few months ago? Well, I don’t think I ever made it clear at the time, but he was obviously based on Jack Elam, an actor who mostly played villains in westerns and gangster flicks in the ’50s and ’60s. Anyway, is there any particular reason why this guy, who died in 2003 and never intruded into my consciousness until July, is suddenly popping up everywhere? Are we in the midst of some Elamssaince to which I’m not privy? I guess we should follow Occam’s Razor and accept the simplest answer: that the there’s a pretty wide overlap between Gasoline Alley’s readership and the set of people who submit things to Pluggers.

It’s a funny world when you wake up one day at the age of 43 and realize that you spend quite a lot of mental energy, as part of your job, parsing the body language of a couple depressed middle-aged bird-men killing time in sad bar, isn’t it? Life is definitely a rich tapestry in that respect. Anyway, in panel one I kind of like — no, “like” isn’t the right word. Let’s just say that I respect the work that’s been put into Shoe casually leaning towards the Perfesser as he taps out his cigar ash, creating a little bubble of intimacy as he asks about his friend’s romantic life, and clearly expecting the answer to his question to be “Sex. Sex is how it went.”