Ugh, so, I guess this is really happening: Rex Morgan, M.D., is going to do a Very Important Storyline about America’s forgotten criminals: people who sell knockoffs of artwork by classic comics artists online. It’s not just nerds who want framed panels of The Flash from 1973 or whatever who are the victims, of course: think of the elderly comics creators trying to squeeze a few last dollars out of their creations, since their original contacts with their publishers left them sorely undercompensated. And think of the anxious nerds who agreed to serve as the middlemen in these online auctions! What about them? Why, did you know that even if these art-forging scumbags are caught, the chances that they’ll be shipped off to Gitmo are slim to none? Thank God Rex Morgan, M.D., is here to raise awareness, just like it raised awareness of MRSA back in ’08, and now there’s no more MRSA. 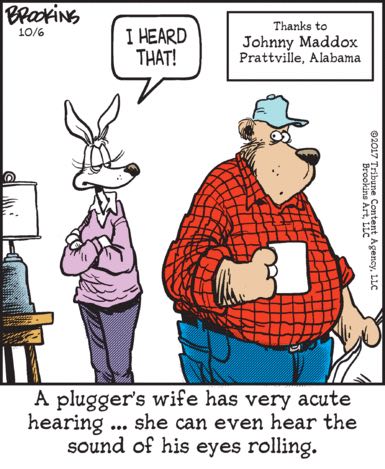 Yes, obviously the joke of this strip is “Ha ha, it’s funny because they’ve lived together for so long that they’re finely attuned to even the subtlest expressions of contempt for one another.” But wouldn’t it be funny if it’s just about how Kangaroo Plugger-Lady Who The Colorists Think Is A Rabbit had incredibly powerful hearing, what with those big ears of hers? Like what if she could hear, from three feet away, the vaguely moist scrabbling noise that an eyeball makes when it’s moving in its socket. She could hear so much, if that were the case. She could hear everything.