The thing about this strip that most irritates me is that it presumes an entirely unearned affection readers have for Beetle Bailey’s antic wackiness. “Ha ha, that’s our Camp Swampy!” says literally nobody. But to get into the specific details that annoy me, let’s take on the fact that panel two is a crowd scene and Beetle Bailey has tons of established but rarely used characters to draw from and yet the background is populated by people we’ve enver seen before. I’m not sure who I feel more drawn to: the two ladies running by in wide-eyed, manic glee, one of whom I’m reasonably sure is holding a giant knife over her head, or the dead-eyed, joyless guy who seems to be thinking “Really? I’m the only black person in this strip and they’ve got me playing basketball? Really?”

Oh, hey, MYSTERY SOLVED, it turns out that scruffy dude hanging out in the swamp rescuing Mary Jane from various reptiles wasn’t some random low-level superhero/Marvel character at all but was actually the Incredible Hulk! Or, I guess, it was Bruce Banner, who’s a nuclear physicist and … I’m not sure why he’d be in a swamp, actually? Or why he’d have the knife skills to chop of a snake’s head to save MJ? Still, the important thing is that, as scientists who occasionally transform into monstrous green creatures, Doctors Banner and Connors are gonna have a lot to talk about, eventually! Like, for instance, that terrible deep gash on Dr. Connors’ leg, and whether he should just double down and root around in his box of potions to see if he can find one that will regrow two limbs. 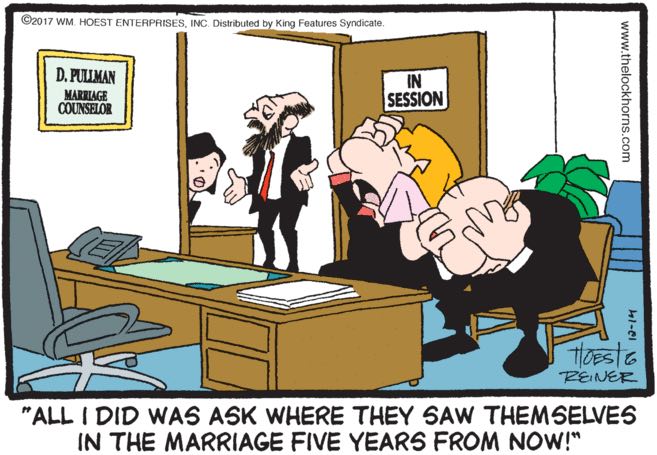 Usually characters trapped in endless, unchanging comic-book time go through their eternal-now lives blissfully unaware of the strangeness of their existence. However, thanks to this seemingly innocent question posed by their therapists, the Lockhorns, who have been in their middle age for almost fifty years now, have been forced to confront the eternity that stretches before them. Having both long consoled themselves that at least death will free them from their mutual prison, they are understandable despondent.