Mary has tossed Ted Miller and his unpleasantness down the memory hole, and it seems that none of her supposed friends are going to really press too hard to get to the bottom of what happened. Certainly not Toby! Toby frankly doesn’t care about Ted Miller, who she can barely be bothered to remember as “Jeff’s friend.” Toby doesn’t care about anything that’s not a delicious muffin. “I guess it wasn’t meant to be,” she says dreamily, staring at the muffin in her hand with an expression of erotic languor that Ian has never seen over the entire duration of their marriage, not even once.

I’m pretty sure in Treetops the vultures are generally depicted as owning the town mortuary? This guy has a different name — “Dooley” instead of “Mort” — but it’s enough to establish that the corrupt Senator Belfrey is in the pocket of Big Death. 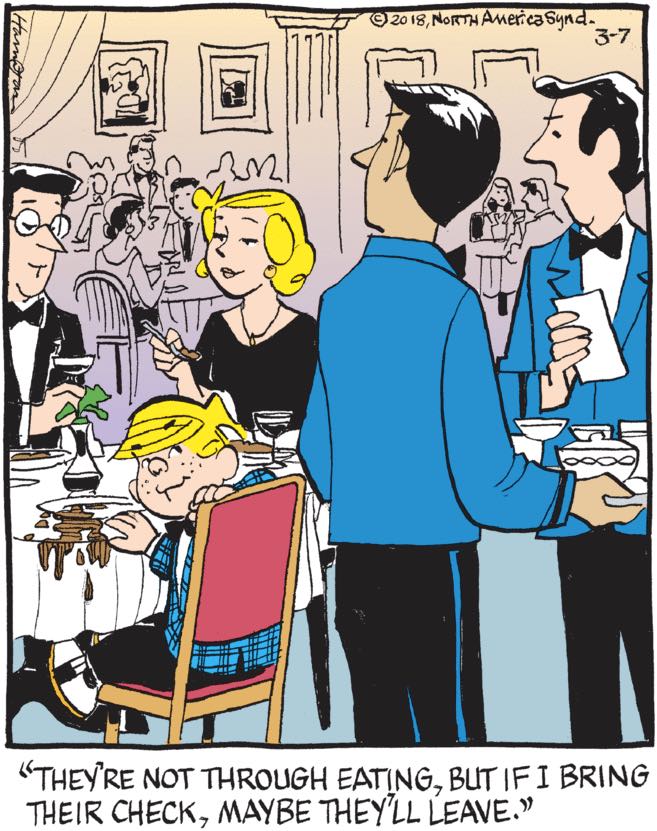 Usually Dennis’s parents are nothing but embarrassed when he perpetrates his menacing antics in front of other adults, but today they seems slyly pleased as he wreaks havoc all over the fancy tablecloth at this snooty restaurant. Maybe they’ve decided to weaponize their son’s bad behavior to strike a blow in the ever-running battle between snobs and slobs? “These assholes are gonna make people put on ties and they aren’t even really French?” the Mitchells think. “Fuck ’em.”