Well, it was bound to happen: the Social Justice Teens are feeling kind of bad about defeating Marty by goading him into cussing on-air. You’d think they’d take the attitude of “Yay, the sports radio guy who literally nobody liked even before we found out he was a racist isn’t going to be saying rude things about our friends on-air anymore!” But these kids sense, at the periphery of their minds, that they are in fact the current protagonists in an ongoing narrative; and while in real life we actually enjoy getting what we want, within a story a protagonist without an antagonist is dull and lifeless, and they know it.

Mary Worth, obviously, doesn’t feel itself restricted by such conventional narrative niceties. Sure, the current storyline of Wilbur’s mid-grade ennui appears to lack dramatic tension, drifting as it is from a little shower singin’ to some light shoe purchasing. But in fact the true interest to the reader is the nature of the story itself: is something actually going to happen one of these days? Or when we picture the future, should we imagine Wilbur thought-ballooning while shopping at various chain stores, forever? 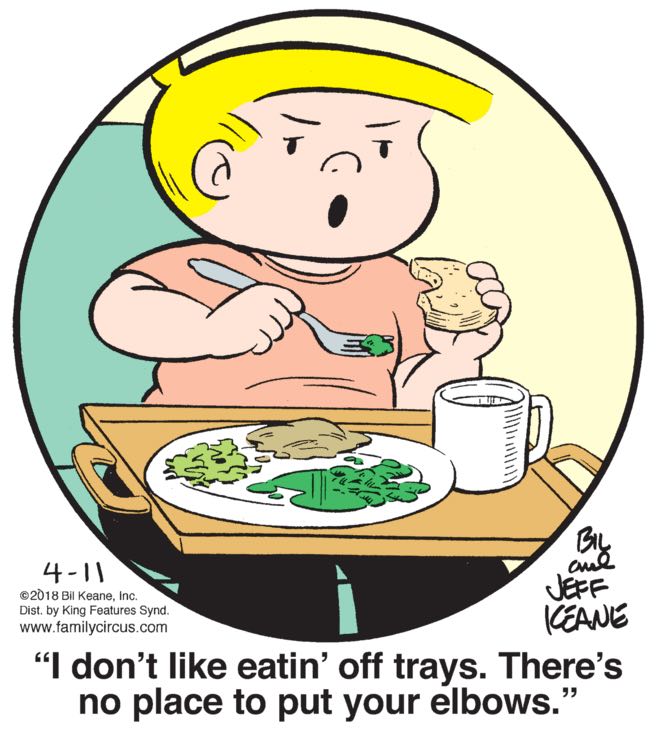 Generally speaking the circumstances in which you’d eat off a tray like this are that you’re eating dinner in front of the TV, which is literally every child’s fondest wish, so it seems weird that Billy is so outraged here. The prissy face really sells it, though. “Mother, not only are we watching televised entertainment rather than earnestly discussing our day over dinner, but the lack of a table means that there are no arbitrary rules of etiquette to enforce! This is sheer anarchy! Also, I dropped a lot of whatever this green goop is on the rug.”