Sorry, Marty: while all-high-school-sports radio is more than willing to overlook a little light racism, they cannot abide the ultimate sin in broadcasting, which is accidentally blurting out swear words on the air. Anyway, today’s strip contains one of the greatest things any Gil Thorp can present to us, which is a panel of Marty Moon looking desperately unhappy as he realizes that he is once again the cause of every major disaster in his own life. This is even better than the time he quietly wept in his car after being golf-grifted by a Ben Franklin lookalike, because you can get a much better look at his face. His crumpled, sad, devastated face.

Wow, for a strip that has traditionally moved at about the speed of plate tectonics, Judge Parker has leapt from Randy doing some extremely mild flirting to Randy doing some smug and blatantly post-coital smirking in lightning time! Anyway, the important thing is that unlike certain soap opera hunks we could mention, Randy has nipples, thank you very much.

I’ve been a daily reader of Blondie for decades and … I’m pretty much wholly unaware of Alexander’s sports career? I mean, he sometimes wears a letterman jacket but I just assumed that was an ossified visual signifier letting us know he’s in high school rather than some specific reference to his varsity status. The sad truth is that Blondie spends infinitely more time dwelling on Dagwood’s relationship with various fast-food drive through speakerphones than it does on his relationship with his own son — which means that by prompting this chain of thought, today’s strip is really just reaffirming its own thesis, so, well played, Blondie. 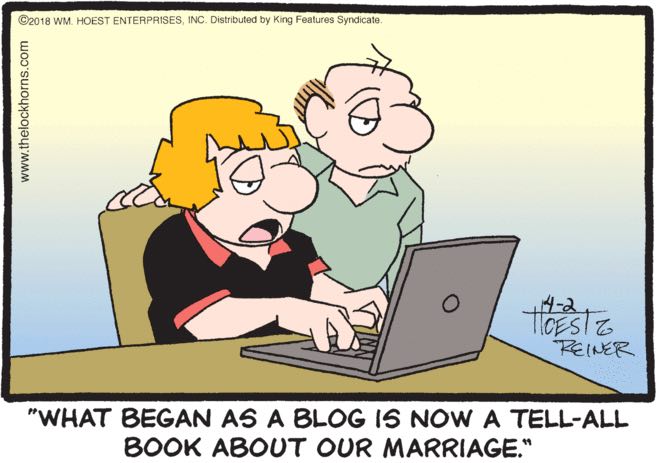 Sorry, Loretta, take it from a guy who singularly failed to cash in when he had the chance: the blog-to-book deal hasn’t really been a thing since, like, the mid-late ’00s.

Beetle definitely murdered someone with that hammer, right?