You know, I’ve spent the [consults notes, pauses a little bit as the unsettling realization sinks in] majority of my adult life shitting on the hard work of legacy syndicated newspaper comics and the mostly anonymous hired hands who toil on them, but I’m going to start my week by announcing that I really enjoyed these two strips today! And not in the “lol, this joke is stupid and for rubes but here, allow me to weave a 500-word essay on how, if you read it on a much deeper level unintended by the artist, which anyone who’s familiar with the Death of the Author theory of literary criticism knows is the only way you should read things, it’s actually good” sense that I usually go in for. Nope, these are just two solid and well-executed gags that combine text and visuals perfectly to make maximum use of comics as a medium. So kudos to Walker-Browne Amalgamated Humor Industries LLC and whatever hedge fund acquired the Blondie intellectual property at fire sale prices after the whole sandwich shop bankruptcy and fraud thing!

Huh, that got a little mean-spirited towards the end there, didn’t it? Apologies, but speaking of mean-spirited, let’s see what Ed Crankshaft is up to! Oh, look, there’s a rude sign at the bank. I know I just said that I go in for the Death of the Author theory but I’m still genuinely trying to figure out if the intended joke here is “ha ha, banks sure are rude” or “ha ha, everyone hates Ed Crankshaft and wants to avoid interacting with him if they possibly can.” 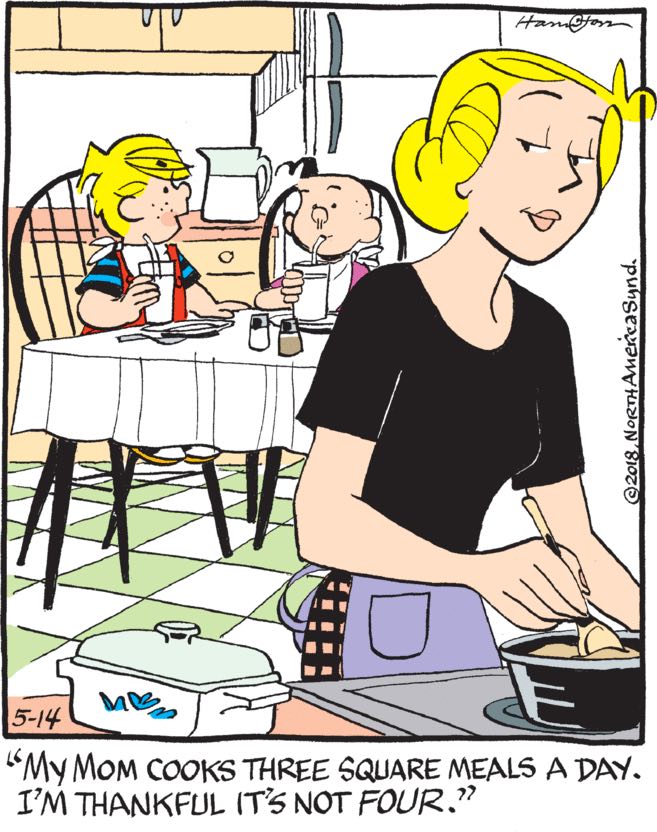 Now that I’m fully back on my bullshit, I’m going to try to figure out what the real menace in today’s Dennis the Menace is. I can’t decide if it’s “Dennis loudly extols his mother’s gendered position in the household” or “Dennis has already internalized society’s unrealistic beauty standards and is fretting about getting fat.”