Oh, right, they tried to kill Dick Tracy last year by tying him to a tree and letting him freeze to death? It was both ineffective and so boring that I seem to have not covered it at all on this blog, and you have to admit it isn’t necessarily the most obvious way to kill a guy when you’re hiring a man named “Sawtooth” with razor-sharp metal teeth to do the killing. I mean, you’d think you’d want the guy to, like, bite him, right? Bite him with his deadly metal teeth? Anyway, Sawtooth is working on his own now, which means he does it his way, which, I assume, means the whole biting-to-death thing. Ha ha, look how excited he is! Gettin’ all sweaty and worked up thinking about all the biting he’s gonna do!

The thing I can’t get past in this cartoon is Elmo’s opening line: “Mom made me wear this for graduation, Mr. B.” I can’t decide which possibility I like more: that Elmo, whose extremely bad attitude is on display throughout this strip, didn’t want to dress like a damn square the way the man says you should for your graduation, but his mom forced him to conform to social norms for at least the length of the afternoon; or if Elmo’s graduation from, like, second grade or whatever is rightfully not being run by his school with any particularly degree of ceremony, but his mother is insistent that her child and each of his milestones, no matter how seemingly insignificant, are of utmost importance and should be treated accordingly. 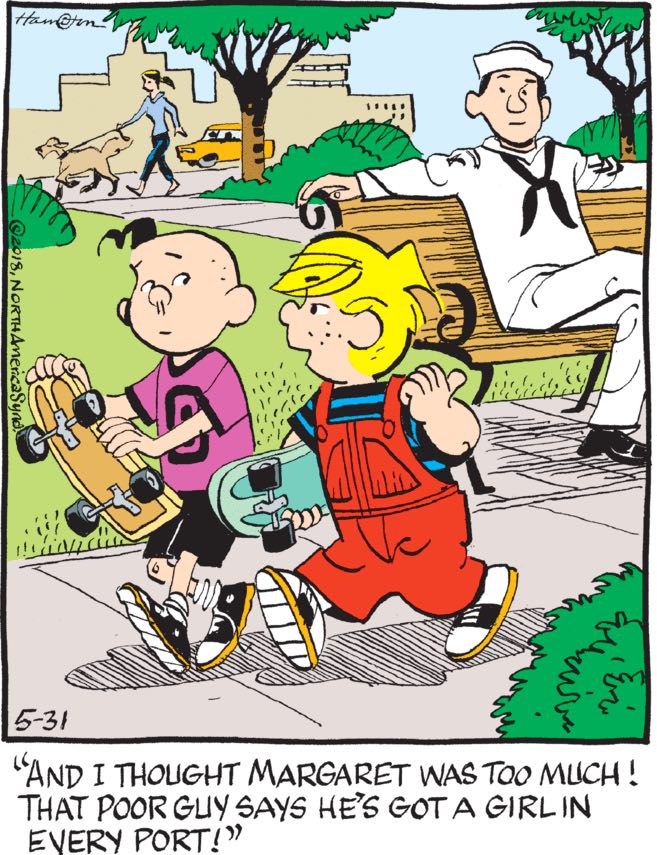 Ha ha, we make a lot of jokes on this blog about what is or isn’t menacing, but I think we can be serious for a moment and say that a guy sitting by himself in the park telling little kids about all the fucking he’s doing overseas is pretty bad news.