There are of course plenty of different schools of thought on storytelling. Some people will say that every detail should point towards the eventual resolution of the narrative, and if that’s the template Newspaper Spider-Man is going for perhaps this angry cabbie will show up up at a crucial part of the climax, out for revenge. But many writers like adding little grace note details to their stories, which make the world of their tales feel more filled out and lived in, and clarify the nature of their characters, without really pertaining to the plot. I assume that’s what’s going on here as Peter Parker is berated by a cabbie as a cheapskate. While Peter himself doesn’t make much money, his wife is a successful actress and, honestly, he doesn’t even attempt to beg poverty. “Sorry. Didn’t have that much money on me,” he says casually. “I just didn’t think ahead, and now you have suffer for it. Oh well!” 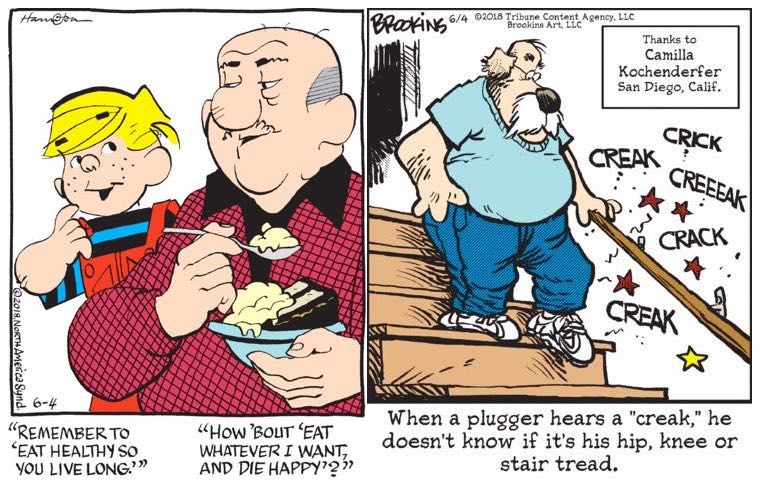 Here we have two men in the twilight of their lives evaluating their priorities in very different ways. Mr. Wilson rejects Dennis’s extremely non-menacing nutritional advice, for a number of obvious reasons: he’s already lived a good long life, and why not enjoy the time he has left, or at least use the fleeting joy of a sugar rush to distract from the fact that what should’ve been his golden years are being spent constantly feuding with the child who lives next door? Then there’s our elderly dog-man plugger, whose house and body are in equal states of disrepair. He could try getting out the toolbox and fixing up the house — he is a plugger, after all, and that’s the sort of thing they do — but, you know, he’ll be dead soon, so why bother? The stair will outlive the knee, at least, and soon he won’t be able to walk down the steps anymore to hear the squeak. Then it’ll be somebody else’s problem.