It is with a heavy heart that I must announce that the new storyline of Dick Tracy once again involves dipping back into the comics nostalgia well, with Little Orphan Annie being dragged back from comics purgatory to dance for our throwback amusement. Why not Brenda Starr, another dormant property who is owned, like Annie and Dick Tracy, by Tribune Content Agency, and who’s also a reporter, which would let us get into all sorts of First Amendment issues with the not-real-into-civil-liberties police force of Neo-Chicago? But, no, I guess we’re gonna see Little Orphan Annie trying to integrate her way into Honeymoon’s social circle, hanging out with notorious crime family relative “Ugly” Crystal and … Kandikane Lane, who is, I have always assumed, an adult? And old enough that it’s just “off-putting” and not “creepy and legally actionable” that she’s partners with a man old enough to be an old-timey movie star? Anyway, more on all this as developments warrant, which will hopefully be never. 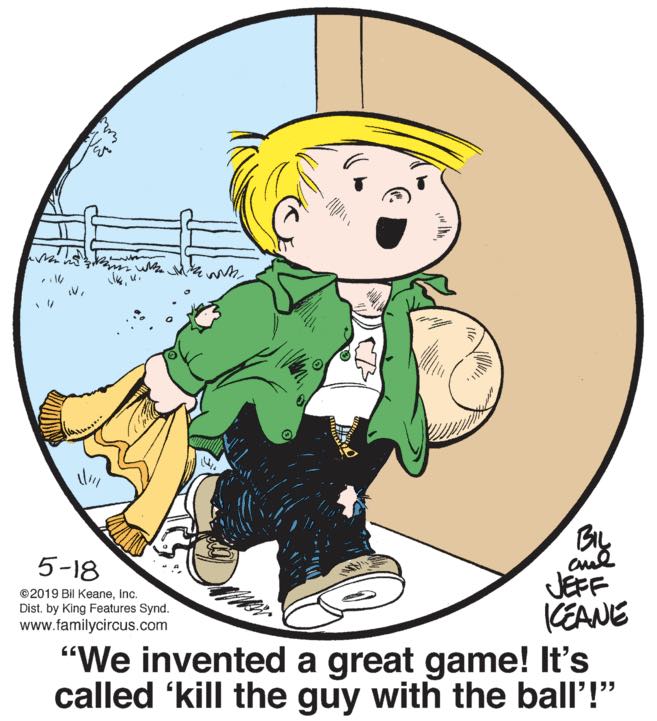 Note that Billy here is in fact the guy with the ball. There can be only one explanation of why he’s still alive: Billy killed all those other kids as they tried to kill him. Billy is a smiling, triumphant murderer, walking back into his home with blood on his hands but no guilt in his heart.