This is a full time Wilbur/Estelle (Wilbstelle? Estbur?) fanblog now and you can just deal with it. Today I am mesmerized by the massive burger looming in the background, which I guess is an image on the window of Delicious Grill(e?) but looks like some kind of hovering alien being, whose research on Earth determined that hamburgers were plentiful and therefore an inconspicuous form to take, beaming love rays into Wilbur and Estelle’s brains and convincing them to head back to Estelle’s apartment for piano playing and sex, for whatever inscrutable reason (presumably the alien’s spacecraft is powered by the energy produced when two middle-aged people settle for one another). 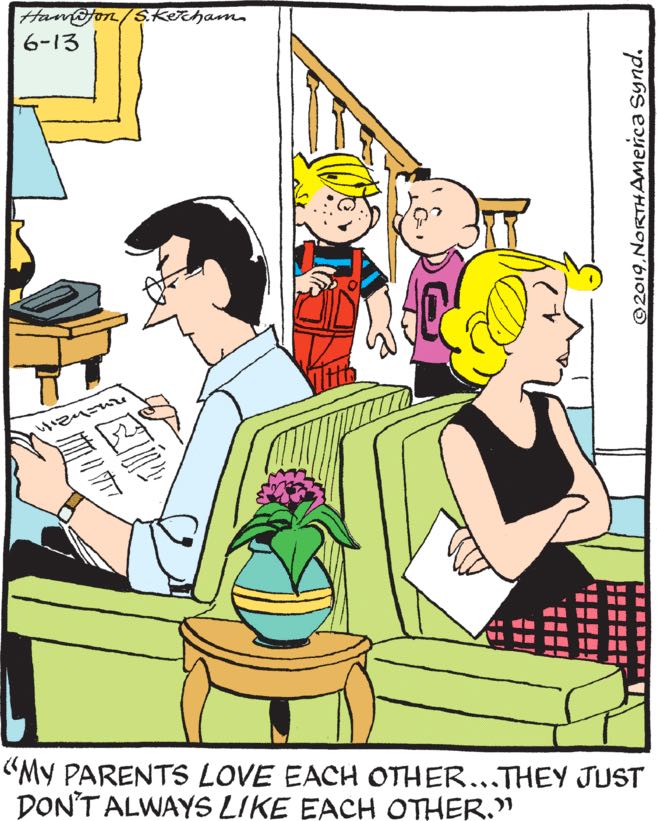 I’m not even going to bother assessing Dennis’s menacing level here, and instead I’m just going to point out the truly bizarre arrangement of furniture in the Mitchells’ living room. Like, did Henry or Alice deliberately move one of the chairs so that they could sit angrily near each other like this? Or is this the permanent arrangement, acknowledging that their amity could shatter into mutual animus at any moment, but their fundamental attraction precludes either of them from just storming out of the room?

Let’s say, just for the sake of argument, that the new owner of your favorite bakery is extremely cheap — he’s skimping on the lemon bars so that it’s like eating all dough and no filling; you order them all the time and you can tell. Sure, you could call a friend on the phone to tell them about it, and that has its satisfaction. But what if you had a syndicate newspaper comic? Then you could tell thousands of people all over the country your tale of woe! Admittedly, that story wouldn’t contain a “joke” per se, but years doing a syndicated newspaper comic will have taught you that if this was once a reason to stop a comic strip from being published, it no longer is and hasn’t been for some time.

Check out Rex’s thinkin’ face in that last panel. “Wait, you can just pay people to go away? Because I’ve got plenty of money and I don’t like people very much. This could really work out for me!”