I guess i’s a step forward that today’s Marvin absolutely infuriated me for entirely non-poop related reasons. No, I’m just furious about how badly this punchline is botched! There are actually two perfectly good ways this basic joke could be done:

PANEL ONE:
BERNIE: Remember that old TV show Cheers, where everybody at the bar knows your name?
ROY: Yeah

PANEL TWO:
BERNIE: Well, it’s like that when I go to the medical building

PANEL THREE:
THERE IS NO PANEL THREE BECAUSE THE FIRST TWO PANELS ACTUALLY CONVEY EVERYTHING YOU NEED TO KNOW! THE MEDICAL BUILDING IS WHERE EVERYONE KNOWS BERNIE’S NAME, BECAUSE HE’S OLD AND SICK A LOT! JOKE OVER!

JOKE STRUCTURE #2 (maybe a little daring for a comic strip, but I think it would work)

PANEL ONE:
BERNIE: Remember that old TV show Cheers, where everybody at the bar knows your name?
ROY: Yeah

PANEL TWO:
BERNIE: Well, it’s like that when I go to the medical building

PANEL THREE:
BERNIE: Everyone there is a drunk!

Don’t worry yourself, Vitamin: I’m sure that the theater, which you literally own, felt absolutely free to make a decision as to whether to cast you in the role you so transparently and desperately want based entirely on artistic criteria. If you don’t believe me, believe the adoring, much younger woman you knocked up!

I’ve been staring at this for a long time and trying to figure out why all the action is a circle in the middle of the panel surrounded by blackness. I guess it’s supposed to be like we’re looking at the scene through a camera, with the implication being “Sure, we live in a society where in order to afford the most basic necessities we might need to leverage our ability to inspire pity on social media, but at least we’re also under continuous surveillance”? 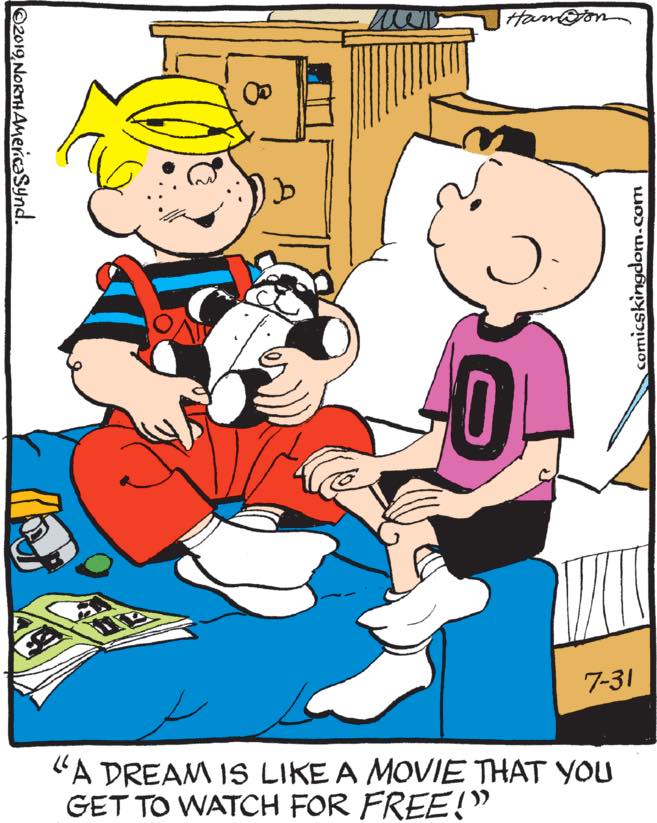 I accept that Dennis’s menacing levels have waxed and waned over the years, but I have to draw the line at this sort of wide-eyed sub-Family Circus-ism delivered while cradling a teddy bear. The only way this is at all appropriate if it’s part of a larger plan to send Joey spiraling down a dark path experimenting with hallucinogens too young and too often.