OK, here’s the deal: in general, I like it when the characters in Funky Winkerbean suffer, because I find them all morally and personally repellent. However, I don’t like it when they use their own suffering as proof of their nobility, and I actively despite it when everyone falls all over themselves to praise the sufferers for being amazing. Sure, Mason could play a dumb “action hero,” like Starbuck Jones, a character millions of people love and want to see on screen, or, as panel two shows suggests, like Wally, a guy who fought in a war and was held captive for years and now works at a depressing pizza parlor for a living, but he’d rather be remembered (by Oscar and Golden Globe voters) as a real hero: a guy who stayed married to his wife when she was diagnosed with cancer and was more or less supportive of her until she died, after which point he started cashing in and never stopped. At least when people gave the characters in Woody Wilson-era Judge Parker undeserved praise and cash, it was funny.

Chet, I’m pretty sure that once you’ve achieved the rank of don within the mafia, you pay other people to act out, pull teachers’ hair, and throw scissors at classmates for you. I’m gonna need you to come back with a better metaphor for this one! 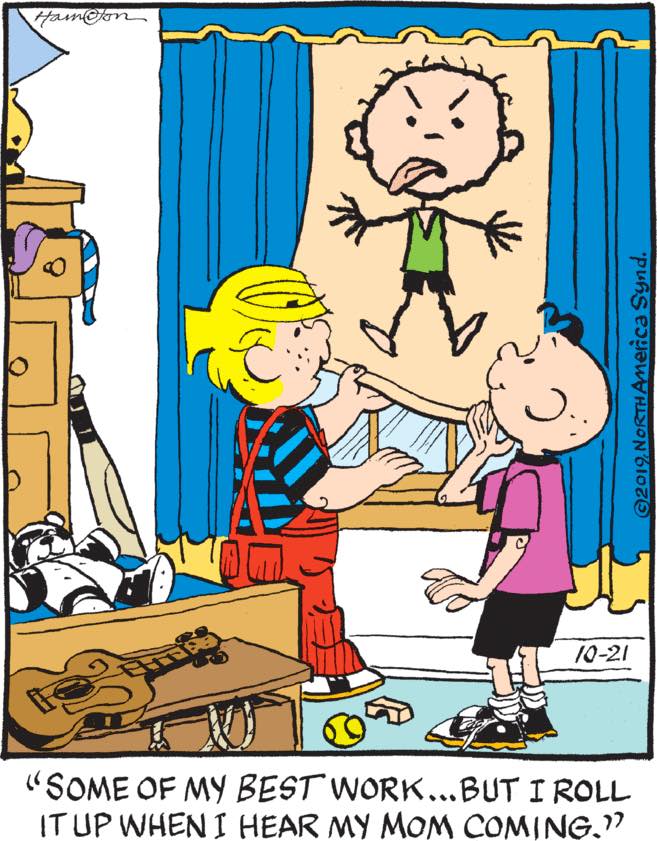 Not sure what I find funnier here: the idea that Dennis has some elaborate curtain/roller-shade window treatment in his room, that he uses his roller-shade for his “bad boy” art (a picture of a child with his tongue stuck out), or that this self-professed “menace” is too cowardly to let his mother know about his vandalism/budding art career.

Hot on the heels of discovering that Iris is fucking herself into a state of exhaustion with her new boytoy, we now learn that Wilbur is focusing on just singing with Estelle because he, too, worries about his own sexual stamina, as he idly stares at this bottle of “VIGOR VITAMINS” at the sketchy supplement store at the mall and wonders if they’ll be enough to restore his declining libido. There has been lots of talk in the comments about Iris and Wilbur improbably ending up back together, and finally we have a good reason why they should: they’re both just too tired to do it anymore, and honestly it would be kind of relief to be with someone who doesn’t expect anything from them, sexually.