Sorry I haven’t kept you up to date on what’s been going on in the month since Mark and Dr. Camel and their crew got attacked by a rhino, but honestly trust me when I say that it hasn’t been that interesting! There was an elephant ride but even that was more boring than it sounds, and as you can see they’re still in Nepal’s semi-tropical lowland zone and not in the rugged, mountainous region, which I assume is infested with yeti. Sorry, Mark Trail, you can’t promise me yeti and then just show me a bunch of boring-ass animals I can see in any zoo and expect me to remain engaged! In today’s strip, Genie desperately tries to liven things up by giving everyone cholera, but Mr. Mark “No Fun” Trail is gonna put a stop to even that.

An underrated thing about human beings — which is often borne out by, say, the oeuvre of Sacha Baron Cohen — is that we try our hardest to maintain illusion that everything is going fine and normally even when one participant in a social situation is behaving bizarrely and inappropriately. I both appreciate and find it fairly realistic that Zak, Estelle, and Iris are cheerfully going around the table saying what they liked about their meal while Wilbur is literally smearing himself with noodles. It’s magnificent.

Sorry, I refuse to believe that this supposed slacker would have a framed picture hanging at a weird angle but then leave his cans neatly placed upright on the floor. And what are you going to stain your shirt with that’s grey? I feel like he’s protesting a little too much, like he wants a girlfriend who’s going to whip him into shape, literally, as part of some slovenliness dom/sub play. 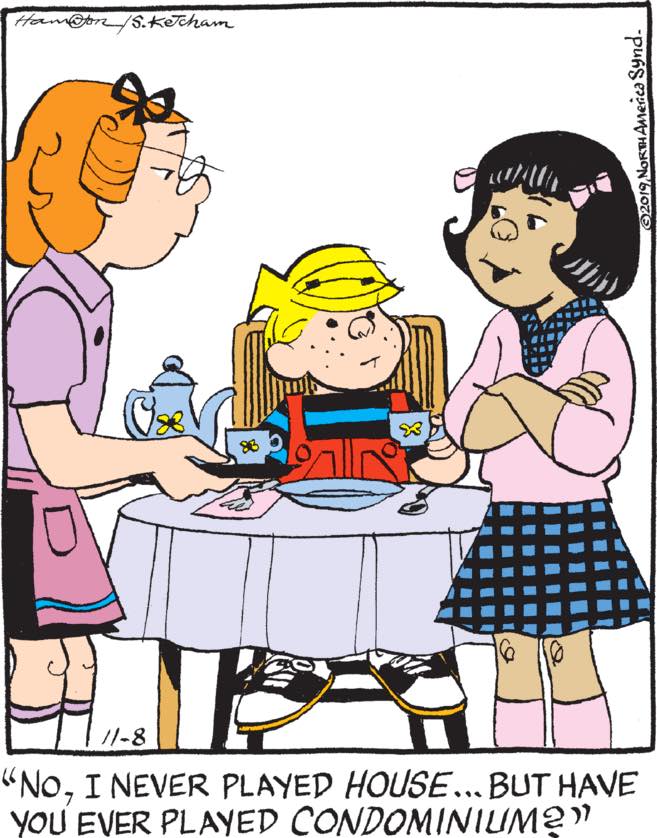 So … instead of pretending to do yard work, you’re instead going to pretend to have a big dispute at the condo board meeting about the various estimates on what it’s going to cost to fix the elevator? I think we can agree both of these games suck ass.