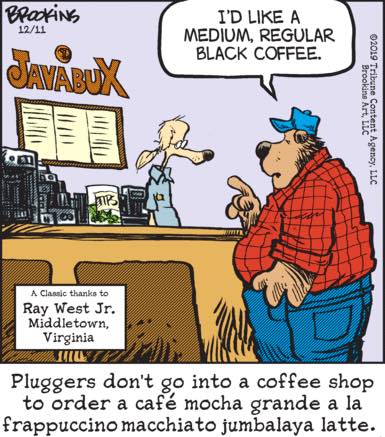 Some commenters here think that I overread smugness into Pluggers panels. For instance, my first instinct is to interpret this panel as saying that walking into a chain coffee shop and just ordering a coffee (which, for the record, is what I do, and is something that workers at said coffee chains are perfectly happy to hear, you’re not blowing their minds or anything) is a morally superior act that really sticks it to the big city liberal millennials with their damn frappuccino macchiatos and such. But maybe I’m wrong! Maybe this is just meant to be a value-neutral descriptor of plugger consumer habits, and stringing together a series of nonsense fauxtalian terms isn’t meant as a slight towards the people who actually do order those drinks, at all. If that’s the case, I would propose that the real plugger here, in a country where working-class people are more likely to be in retail than manufacturing jobs, is the slouched, middle-aged, minimum-wage-earning balding-with-a-ponytail dog-man behind the counter, and not Andy Bear, who presumably has a solid pension and set of benefits from his union construction job. Dog-man is probably thrilled to get a plain coffee order, since that’s much less complicated to make! Truly, Andy’s choice is an act of solidarity!

Ahh, our sinister villains are going to stop at nothing to lure Mike Nomad and Steve Roper to their doom, keeping at it even after their exploding car gambit failed. I don’t know why but I find the claim to be “armored car driver” extremely funny. It’s like their logic was “What’s the most trustworthy job? Cop. Oh, but wait, they know all the cops already. What’s like a cop, but, you know, maybe in a truck of some kind?” 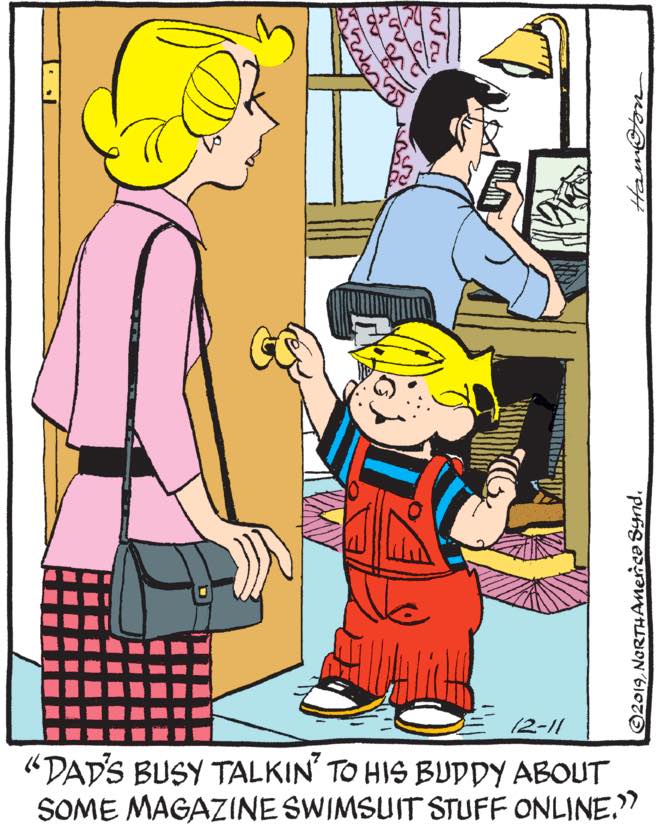 Good news, everyone! Mindy had her baby, and Mindy and her baby are both still alive! Bad news, though: Check out the expression on Buck’s face in panel three. That’s the look of a man who’s had a terrible girl’s name up his sleeve for months, just an absolute dogshit name, and has been eagerly awaiting the moment to unleash it.