You know, in the literal century this strip has been in newspapers, it’s been easy to sometimes lose track of what it’s really about, the true meaning of Snuffy Smith, if you will. Sure, most people probably think of it as a vehicle for increasingly baroque FDR-era hillbilly jokes, playing on stereotypes and a visual vocabulary that literally nobody alive today has any first-hand experience with. But today, on Tax Day (observed), Snuffy reminds you of what he’s really all about: he does not pay taxes, and if you know anything about him, that’s what you should know. It’s not like he has some elaborate political theory about being a sovereign citizen or the U.S. government being illegitimate or anything that; he just don’t truck with the revenooers. Screw you, Commissioner of Internal Revenue Charles P. Rettig! Snuffy isn’t paying you shit!

Hey. Hey there, comics fans. I know what you’ve been thinking about but are too shy to ask: “How have Ed Crankshaft’s poops been lately?” Well, the answer is regular, real smooth and regular. Also, he doesn’t have any clue about anything that’s been going on in the world, and honestly, I think that’s a perfectly valid trade-off. 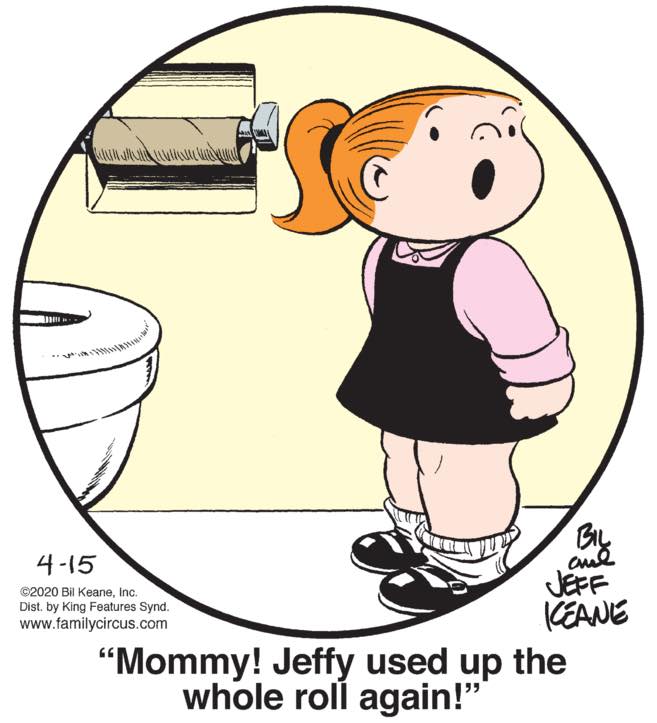 Speaking of poops and things going on in the world, I have no idea if this one was pulled from the Big Family Circus Vault because of its resonance with our modern TP-hoarding crisis or what, but this is definitely the sort of thing that could get a unloved red-headed middle child “volunteered” to a lab as a human guinea pig for testing coronavirus vaccines, just saying.