Because Dustin tries to take an even-handed approach to its tales of the generation wars, it gives each of its main characters little foibles: Dustin, for instance, is lazy, feckless, stupid, unattractive to women, and generally is responsible for this once-great nation going down the toilet, whereas Dustin’s dad sometimes likes to snack too much. Anyway, I’m a guy who knows a little bit about emotional eating, and if Dustin thinks his dad can’t shovel popcorn into his maw while weeping, well, it looks like stealing his dad’s popcorn is just another “job” he’s going to fail at.

Mary’s go-to piece of concrete advice when people are having a hard time choosing between options is to tell them to make a list of pros and cons, and it looks like Dawn is getting a lot of material as she decides which boyfriend to dump!

This strip’s occasional “Minit Mysteries” have usually honored the second half of that phrase, each one providing clues over its two-week span that would allow to reader to solve the mystery, Slylock Fox-style. However, it seems the current Case Of The Sexy Tied Up Alien is going to be solved the “old-fashioned way,” which is to say by the police force executing a no-knock warrant and charging in with their guns blazing, killing perpetrator and victim alike. 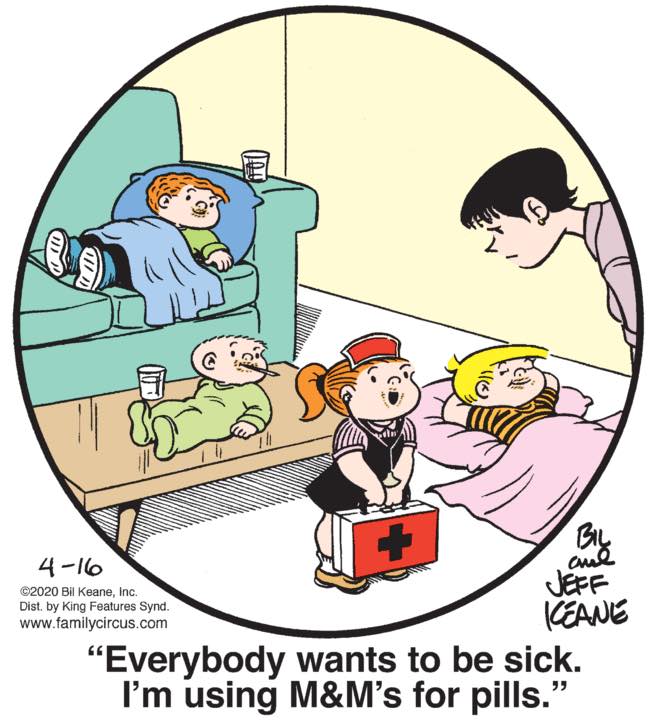 Man, the Family Circus intern/algorithm that combs through the archives for topical panels sure is working hard, huh? I assume this one was originally created as part of a campaign against single-payer health care.

Gasoline Alley, the strip that brought you a thrilling storyline about trying to return a DVD player, now puts you through each pulse-pounding moment of a meeting that falls apart because the organizers can’t figure out the A/V equipment and the main speaker is late!!!! Can you handle the thrills??????