Ha ha, I assumed this lady was a well-known hospital volunteer or something, but it turns out she’s just a mysterious stranger who’s berating Rex about his romantic ineptitude while he just has to sit there and squirm. Can anyone else even see her? Hey, wait — this is still June’s version of the story — is this her fantasy of why Rex finally gave in and admitted his love for her? The psychosexual dynamics of their marriage are more twisted than even I imagined.

Oh ho, it looks like Cherry is about to suggest that this entertainment industry power couple, who are used to five-star accommodations wherever they go, should stay at the Trail family’s rustic cabin! This can only be a prelude to her asking them to swing, which for Cherry means cornering them when Mark is isn’t paying attention and asking them, in an intense whisper, what sex is like. They’re “Hollywood people,” so they’ve probably done sex, right? Anyway, they’re both visibly cringing away from Cherry’s question in panel three, for obvious reasons. 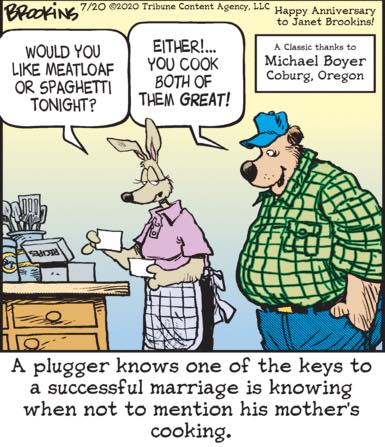 The joke here is that this plugger spends every dinner mournfully eating the meals his wife prepares for him and dreaming of his mother’s superior cooking, and it doesn’t matter what she makes because she’ll never be good enough, but after years of therapy and two near-divorces he knows better than to verbalize this now, right? This is a “Pluggers Classic” and I swear I commented on it before but I couldn’t find it in my archives, so this may be a repeat joke, but my search wasn’t totally wasted because I found more evidence of the mommy issues that are tearing this mismatched bear-kangaroo couple apart.