Haha yes Dagwood is on an emotional roller-coaster because the idea for wearable food-based scents that he came up with during an idle sandwich-binge but never pursued has been monetized by someone else with a dumb brand name, and now with that out of the way let’s get to the real story here, which is the weird rolls of flesh (?) around Dagwood’s neck. Longtime readers know I’ve been worried about these things for some time; once, long ago, I worried that Dagwood had maybe sewed a turtleneck out of human skin. But now I think something slightly more subtle is going on here. Dagwood’s face is as smooth and youthful as it’s ever been over the course of his 80+ years in the comics pages. Could it be that only his wrinkled neck-flesh reflects his true age? I would be wholly satisfied if this were the result of either a Portrait of Dorian Gray-type curse scenario or an increasingly elaborate series of facelifts that had to shift the excess wrinkles somewhere.

Well this has definitely been the boringest ever Apartment 3-G storyline that’s been played out over the course of a conversation between two non-main characters whose motivations we can’t understand and don’t care about! So, in addition to being Jack’s love interest and an example of what Lu Ann would look like if she were put into a highly experimental fast-aging chamber, Carol is also the best friend of Jack’s dead wife! Also, Jack has a dead wife! I guess we’ve finally figured out what this plot is about: Tommie and Jack are mourning their dead partners in the same way: by not talking about it and burying their feelings under mounds of horse poop.

Congratulations, Hi and Lois: after literally years of unsuccessful attempts, you have finally made me genuinely laugh. Hi’s tiny brandy snifter is a nice touch, as is the fact that Botticelli’s Birth of Venus is hanging on the wall, which Hi, in a signal of his total commitment to this passive-aggresive gag, presumably put up to replace whatever sub-middlebrow print was there before (some cursive phrase about the importance of family that you can buy framed from Target, I’m guessing).

True story: when I read panel one, I legitimately thought the joke was going to be based on the premise that Hootin’ Holler was one of those few regional markets where you can still buy Tab, the diet soda that’s now been almost entirely displaced by Diet Coke. But then I got to panel two and realized it was just yet another Barney Google and Snuffy Smith about how all its characters were desperately poor and I got real sad. 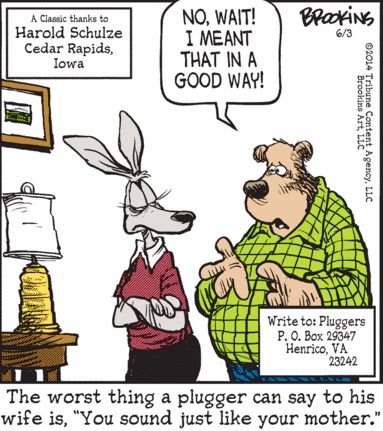 “No! Your mother’s great! I love your mother! I think about having sex with your mother all the time! Come back! What am I saying wrong?“