So as anyone would’ve predicted, this abandoned cat was befriended by Andy, brought into the Trail household/menagerie, and dubbed “Tabby.” Mostly I’m showing you today’s strip because it seems wild to me that Cherry, whose father is literally a veterinarian, is shocked to learn that sometimes people abandon their pets. But if Doc has indeed sheltered his daughter, who I’m reasonably sure is now in her 30s, from the more sordid aspects of the life of domesticated animals, it could also explain how she apparently doesn’t really know what sex is, either. (Remember, this is what Cherry thinks sex is.)

You know, I’ve always had a sort of unreasoning hatred of Tom Cruise as an actor, to the extent that sometimes I avoid movies he’s in that I otherwise might enjoy. But when Vanilla Sky came out in 2001, its marketing campaign teased that Cruise’s character would become hideously deformed over the course of the movie, and I was like “Tom Cruise? Hideously deformed? Hell yeah” but it turned out I hated that even more, somehow! What I’m trying to say is that Funky Winkerbean is trying to stop me from doing more rants about how this isn’t the way urban wildfires or LA geography works (are they driving from … Burbank? Hollywood? NONE OF THIS MAKES SENSE) by at least teasing me with the prospect of Les and Mason becoming terribly burned, like maybe their whole faces will get burned off, but sorry, you’re not going to fool me again! I still hate it! 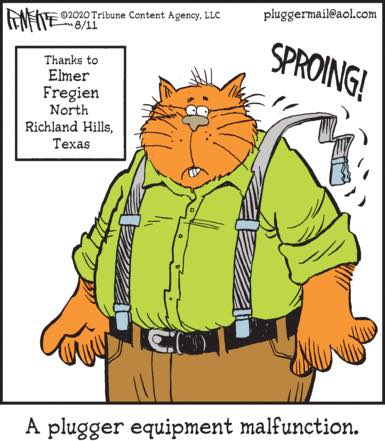 I was going to complain that the whole point of pluggers is that they hold down honest, solid jobs in factories and on construction sites where literal equipment malfunctions are actually a workplace hazard, but then I realized that this is probably a half-remembered reference to “wardrobe malfunctions” and I think it means that we as a nation are finally, finally getting over the time where we almost but not quite saw Janet Jackson’s nipple during the Super Bowl halftime show in 2004.