Oh, God, sorry to be the insufferable Los Angeles geography knower but a week ago we were told this fire was called the Point Dume fire, presumably because it had started around Point Dume in Malibu, and today we’re told it’s reached the “Hills of West Hollywood,” by which I guess they mean the hills just north of West Hollywood, there are no actual hilly neighborhoods in the city of West Hollywood proper but never mind that. Anyway, there’s really only one problem with this, which is that if a fire had spread from Malibu to West Hollywood, probably no newscaster would be standing just feet away from it because it would be a thirty-mile wall of flame that managed to jump two freeways, destroy the Getty Center and several extremely wealthy neighborhoods, and just generally be an insane catastrophe that would send literally millions of people fleeing pell-mell from the destruction!

Anyway, this post is mostly for my mom, who’s very convinced every time there’s a fire in LA that our house is on the verge of burning down. Our house isn’t gonna burn down, mom! We’re way too far from any natural vegetation for that to happen. The way LA’s gonna kill us is from the car exhaust from the massive freeway interchange half a mile away, which is not as dramatic. 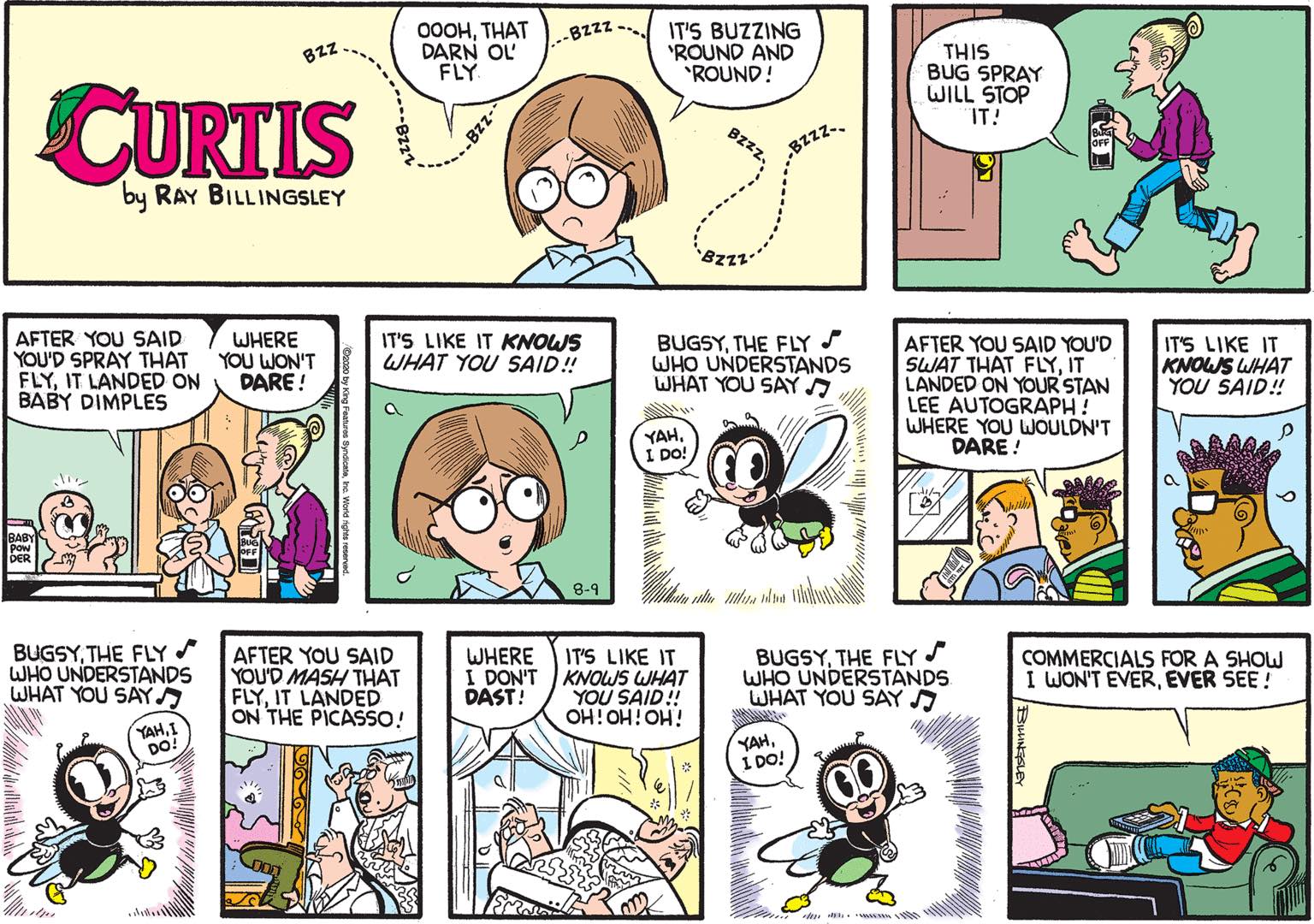 You know what filled me with absolute, unalloyed delight in today’s comics? Bugsy, the fly who understands what you say! This is insane and kind of out of character for this strip and I love all of it — the big cute eyes on Bugsy, the way he he gestures with all six of his limbs, the overwrought reactions from all his victims! I’d actually argue that he doesn’t just understand when you’re talking about killing him: he also knows what you value most, which is honestly much creepier.

As far as strips in today’s comics where the characters watch a deranged commercial go, Gasoline Alley is sadly a distant second to Curtis. What exactly is the implication of the exchange in the final panel? Is Rufus planning on shitting in the cans? Is that it?

Oh, finally, America’s #1 medical soap opera comic is going to actually grapple with the biggest medical crisis in the last century! Unfortunately, based on the “Lockdown Stories” title, I suspect we’ll be seeing less of Rex telling nurses from across the room to turn patients over onto their stomach and being given 10,000 doses of remdesivir without asking for or really needing them, and more Buck working from home trying to sell music and art from guys who were famous 30 years ago over the internet while his wife takes care of his newborn son and very quickly comes to loathe him.