I guess the joke here is that Sarge is an ape-like brute who took Beetle’s first-panel retort as an invitation to pound him into a pulp in traditional Beetle Bailey fashion. But I’d like to imagine that in fact Sarge took Beetle to a zoo or gorilla sanctuary and threw him into an enclosure to be attacked, or perhaps released a gorilla he keeps captive for just such occasions, because he is a very literal ape-like brute.

Faithful readers of this blog know that I’m extremely on board with Hi and Lois reclaiming Thirsty’s original characterization as a sad, desperate alcoholic. I’m sad that the colorists of today’s strip, apparently unaware of the comics’ rich history of using alcohol-inflamed rhinopehyma as a visual gag, spent all their red-yellow gradient efforts on the fall leaves and not on Thirsty’s cross-hatched nose. Because Hi is trash-talking his neighbor and best (only?) friend well within hearing distance, I assume that Thirsty is fully passed out in that chair. 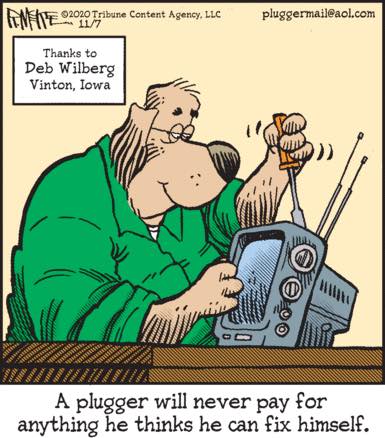 I am dying to know the relationship between this strip and the infamous “Rhino-Man Hocks His TV” panel, not least because that appears to be the identical model of television, which was decades out of date even when Rhino-Man hocked it back in 2006. I don’t know if we’re supposed to understand that Dog-Man is superior to Rhino-Man in fixiness, the quality most valued in a plugger after down-home smugness and sexism, or if this is in fact the exact same TV, which the guy at the pawn shop gave Dog-Man at no charge just to free up some space on his shelves.