Say what you will about Snuffy Smith, but this is a strip that respects its own world-building. It has been long established that, while Hootin’ Holler’s denizens may engage in a certain amount of chicken-based barter with one another, and occasionally pay for potions from unlicensed apothecary Granny Creeps, Silas’s general store is the only place in town where money is exchanged for legitimate goods and services in the manner in which we flatlanders are accustomed. Does it seem weird to order pizzas from such an establishment? Maybe, but any Snuffy trufan knows it would be even weirder if we pretended that Hootin’ Holler had a local Domino’s or some such. 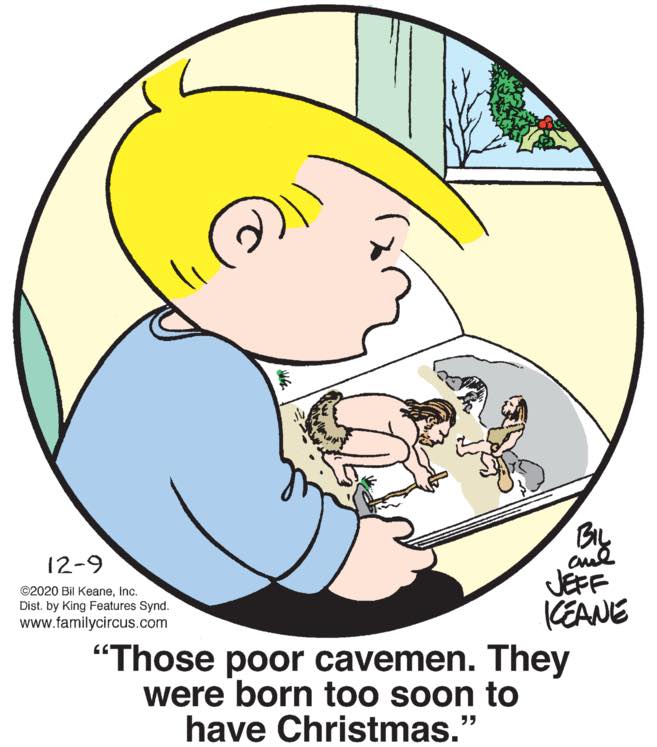 The question of “If our religion is the only way to salvation, what happened to everyone who never heard about our religion because they died before it started or reached their part of the world?” is old and widespread enough that it has a fancy theological name, “The Fate of the Unlearned.” Still, part of the fun of the Family Circus is seeing kids say the darnedest things as they begin the encounter the problems of the adult world, and indeed I did actually chuckle to myself at seeing Billy look at that picture and think “Gee, it’s sad these cavemen never got a visit from Santa! Also, they’re probably in hell now.”