Well, it looked like Gil’s little stunt — benching his feuding #1 and #2 QBs and putting his #3 QB in at the helm of a wacky offense — worked! It didn’t work in the sense that it brought the team a championship (they’re playing for conference runner up here in their last game) but it worked in the sense that it taught his fractious starters a lesson, a lesson they learned so well that neither of them has much interest in playing football at all anymore. I assume in panel three we’re meant to understand that they’re doing “No, after you” pantomime gestures down on the sideline that are so exaggerated that they can easily be interpreted by their wide-eyed classmates sitting up in the stands. 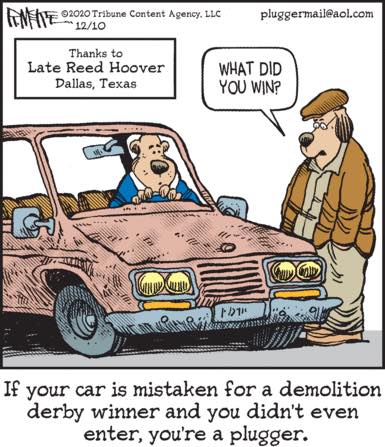 Reed Hoover may have passed away more than a year ago, but his utter dominance of Pluggers will never end. Like longtime and recently retired artist Gary Brookins before him, new guy Rich McKee isn’t afraid to turn a cold eye on the pathetic, eager suggestions clogging the pluggermail@aol.com inbox and say sneeringly “Sorry, folks, none of you can hold a candle to Reed.” Then he selects one of Reed’s banked Pluggers pitches at random, which I assume he keeps in an ornate wooden box.

I never think the jokes in Crock are any good, so it’s kind of a relief to see a strip where they didn’t bother to include one! Just a little vignette about an incompetent military officer and his men, who are about to murder him.