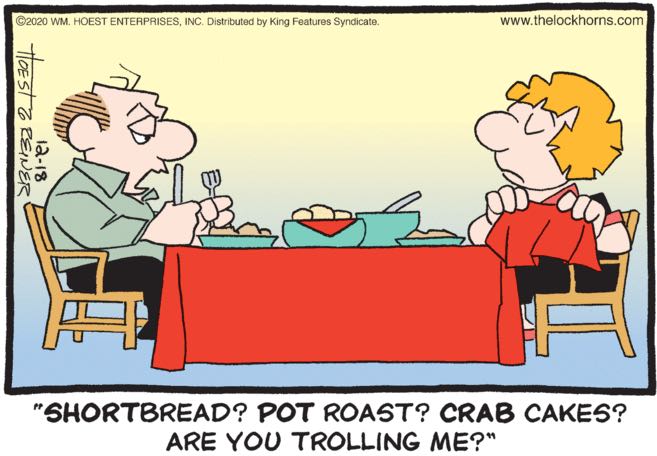 A question that often bothers me about the Lockhorns: are the titular couples weird tiny gnomish people within the universe of the strip? Or are they of ordinary stature and drawn that way for comic effect? Evidence for both interpretations can be found in the strip, depending on the day! Today, we learn that Leroy, at least, is considered short, and is sensitive about it, and also that Loretta is willing to craft meals out of entirely incompatible foodstuffs just to irritate Leroy, which I deeply respect.

PHANTOM RHINO UPDATE: I love that the Phantom’s rhino ally, having burst dramatically through the window, is now just casually standing around while the humans dispatch their enemies, lucha libre style. He’s ready to lumber into action in case a rhino-level adversary appears, but for now? He’s just keeping an eye on things.

“And so we used the action figures as replacements for the band members. Huh. Well, it turns out this isn’t a very long story at all. Or an interesting one, for that matter!”