Much as I would like to live in a world where, even in bland suburban communities like the one where the Bumsteads live, there are standalone storefronts that cater entirely to readers of niche publications like Vinyl and Fish and Giants Fan, I feel I must point out that even full-service bookstores are having a hard time staying afloat in the age of Amazon, so I am forced to describe the setting of today’s Blondie as “wholly unrealistic.” I’m trying to imagine the sequence of decisions that led to the creation of today’s strip, and while it makes sense that the writer of a legacy newspaper strip would imagine a paradise where print media still ruled, I think it’s more likely that they came up with a magazine joke first and were trying to figure out where to set it and thought “magazine … store?” and decided to call it a day at that point. 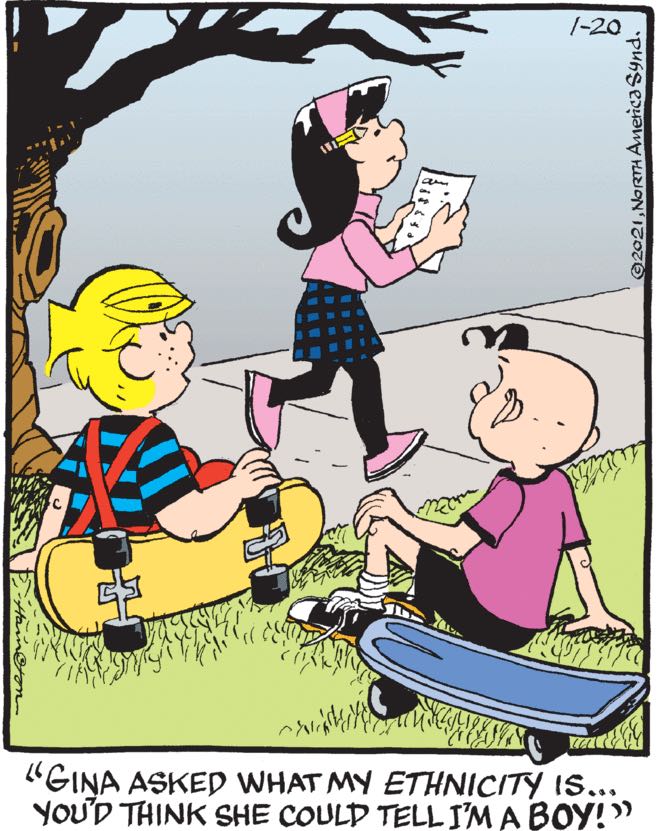 Gina has long been one of the less interesting characters in Dennis the Menace, since her whole deal seems to be “a girl, but less annoying than Margaret.” But she’s certainly shot to the top of the menacing charts with her new project, the Neighborhood Racial Purity Census.

Dawg’s dead, everyone. Dawg’s dead and he’s in heaven now. Pour one out for Dawg, the beloved dog character from the syndicated newspaper comic Hi and Lois!