Oh man, I honestly don’t know where this is going exactly but I’m very excited about it. I think every soap strip should do a storyline about social media influencers, because I want to find out what all of them think social media influencers are! Anyway, this strip is chock full of things I love, including but not limited to (a) Ashlee responding to Drew asking her if she takes photos by specifying that she takes selfies and then (b) immediately showing him a picture that is obviously not a selfie (side note, I’ve been obsessed with a Buzzfeed article I read last month about the theory that many influencers’ “mirror selfies” are actually just pictures of them taken by someone else while they hold up their phone, but Ashlee isn’t even doing that level of pretense), and (c) Drew says “You certainly have the looks to be one!” only after seeing the picture of her, even though he’s been looking at her IRL all this time. Anyway, I certainly hope that Ashlee initiates a torrid sexual relationship with Dr. Drew in hopes that he’ll post some of her selfies to his high-profile account and in so doing boost her Instagram following, which is probably the saddest reason to sleep with someone that I can possibly imagine.

Judge Parker isn’t doing a social media plot, but a storyline where Sam Driver gets punched in the face is almost as good.

After blowing up a perfectly nice dinner, Abel Brito has been presented with a choice: either he drops the subject of libraries, or he works to join the library board and implement his vision of transforming money-losing libraries via a public-private partnership into profitable Amazon Reading Centers™ that are free to enter for all Prime subscribers. 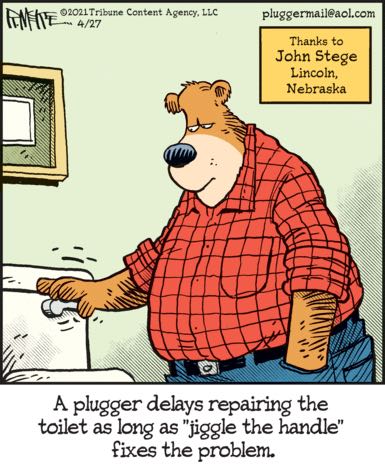 With all the shit I give Pluggers on this blog, you might be surprised to learn that some days it moves me and spurs me to make a difference in my life. For instance, today’s panel moved me to finally text our plumber to come deal with the toilet handle, after I tried and failed to fix it several weeks ago. Congratulations, Pluggers, on providing this call to action. I thank you, and more importantly, my wife thanks you.