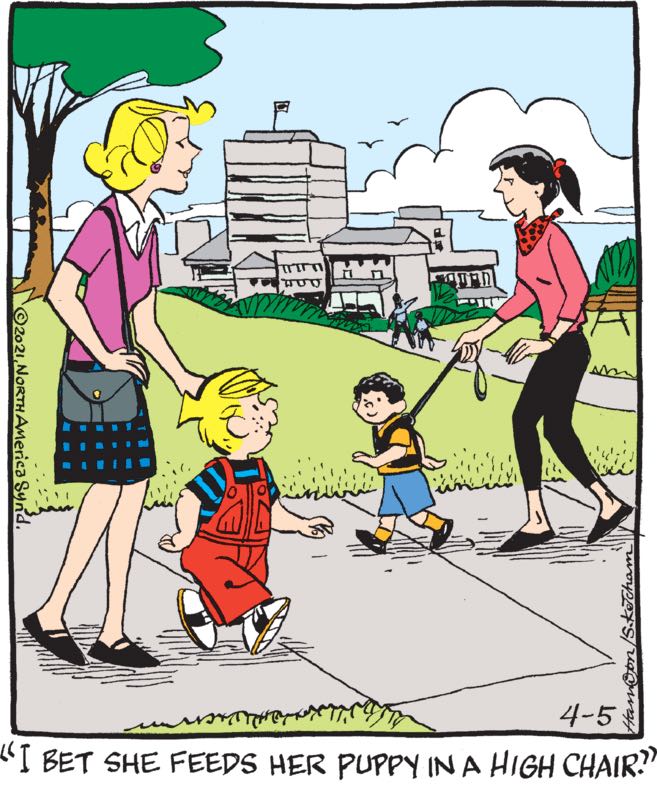 I like that these two kids and their moms have similar facial expressions, as if both pairs were mirror images of one another. In particular, I’d like to imagine that, while Dennis is cracking wise about this kid living a life no better than a dog’s, the leashèd child is saying, “Look, mommy, that boy is experiencing freedom! Horrible, horrible freedom!”

When I first saw this strip today, I assumed that it was maybe the anniversary of the first Mary Worth strip or something and there’d be tributes to our favorite gal all across the King Features comics pages today! But no, apparently all that happened was that someone in the Snuffy Smith creative team thought up this pun and declared “Tarnation, fellers, that there’s good synergy!” (For this bit, I’m assuming that a requirement for working on Snuffy Smith is that you have to talk in the fake and borderline offensive Snuffy Smith hillbilly patois at all times when you’re on the clock.)

Anyway, Mary has plenty of time to appear in other comics because, even though we all assumed that this storyline had finally, blessedly reach its natural conclusion and we’d need her back to set up the next one, it turns out that’s not true, at all! In fact, it’s never going to end and this is our hell, just two old people half-heartedly flirting by talking about how great dogs and forgiveness are.