Sarah may have forgotten all her magical art skills due to her amnesia, but at least she still has the vague notion that artists use paint and brushes in their day-to-day work. Despite being a doctor’s daughter, the quotidian details of medicine are apparently unfamiliar to her. Doctors punch people, right? That’s how they get them to stop complaining about their various ailments? By knocking them unconscious with a fist to the jaw?

Over in Mark Trail, Mark’s offhand remark to Rusty that “crickets are land shrimp” went viral on Rusty’s TikTok BikBok, and so he’s flown to LA to do a hip-hop video with Reptiliannaire, a reptile-themed rapper. However, because I know a lot of people read Mark Trail for accurate information about flora and fauna, I find today’s strip irresponsible: I can assure you that you are not likely to step out of LAX and encounter an iguana in the backseat of the first car you enter in the “California reality.” (You will instead get into a Lyft that smells like weed.)

Hey, remember when Saul first showed up in Charterstone, and he was a rude jerk to everyone, and then then his dog died, and he was emotionally devastated, and also it turned out that many years ago his family forced him to give up his true love in order to marry someone else, and he literally fled in terror when Mary tried to get him to talk about his feelings, so eventually she just forced him to adopt a dog against his will? Well, he’s never been to therapy! What could he possibly gain from it? It’s for girls, mostly.

You ever look at some particularly weird character design choice in a legacy comic and think to yourself, “Enh, that’s just the ossified memory of some decades-old artistic style that sort of made sense in a former aesthetic and is too closely tied to the character to ditch now, it’s probably not worth thinking about.” Well, I regret to inform you that those design choices are very real and literal in the universe of the strip, and they make other characters in the strip horny. They are absolutely a sex thing. Huge apologies for breaking this to you like this, but I don’t believe in letting my readers live in a world of comforting lies. 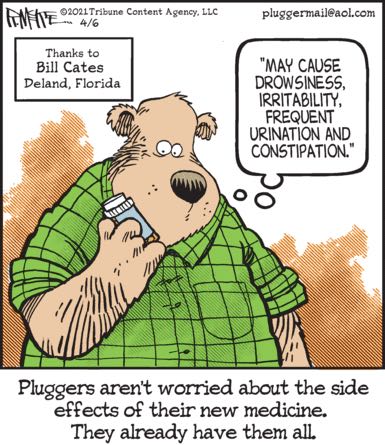 “Oh well,” you’re probably thinking after that one, “at least I don’t know much about pluggers’ peeing and pooping situation.” Well, I’ve got bad news on that front too.