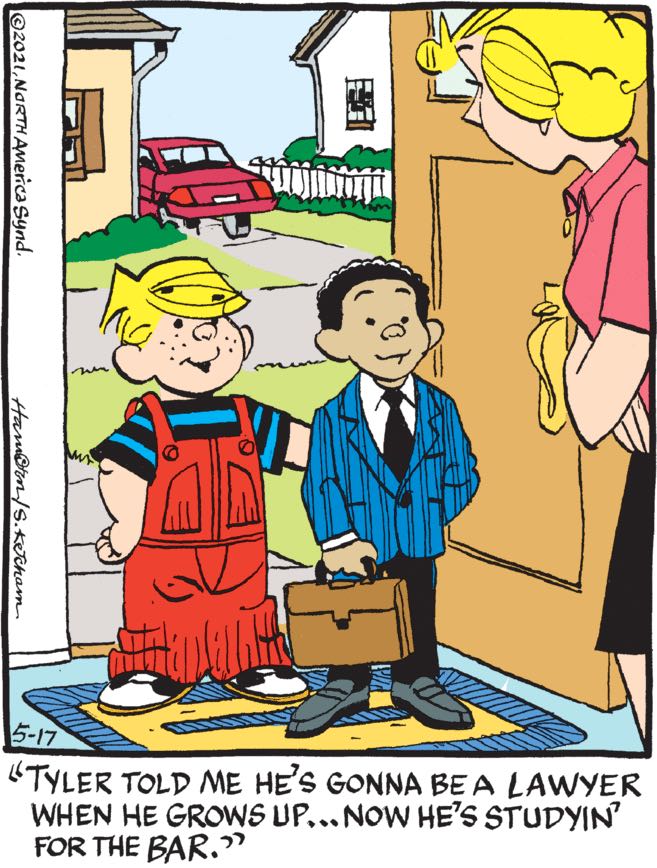 Look, the only time I want Dennis to say “Now he’s studyin’ for the bar” as a punchline is if he’s repeating some crack from his parents about their guest’s terrible drinking problem that he pretends he didn’t understand. But this? I honestly have no idea what this is. A true menace would maybe be running a scam where he dresses a fellow kid up in a suit and claims he’s a lawyer and dares adults to contradict him, going on a small-time reign of legal terror, but we all know Dennis doesn’t have the grit to pull off a plan like that. Anyway, this kid’s a real square-ass nerd and Dennis, the comic pages’ biggest “menace,” is his friend and real proud of him, I guess!

Aw snap, today’s my favorite day of the season: when the team over at Gil Thorp HQ pulls the giant lever all the way over to “wacky!” It looks like in addition to going to high school and being on the baseball team and working odd jobs to help support his impoverished family, Zane is going to be running for the library board against his girlfriend’s dad so his girlfriend’s dad can’t put his “let’s shut down all the libraries” agenda into action. Can this be any good for his relationship, his grades, or his fastball? Probably not, but it’s good for drama, which is what I crave.

Speaking of drama, just days ago someone tried to assassinate Dick and Sam’s protectee in broad daylight. But today? Today they’re going to enjoy the legitimate theater!