Oh hell yeah, it’s Shauna, everybody! Surely you’ve remembered Jeff’s little story about Drew’s ex Shauna, who was wild and demanding and also liked to steal stuff. Now she’s standing in front of the People’s Clinic bold as brass, looking all sexy in an … off the shoulder … sweatshirt? … and two tone bike shorts? … anyway, it’s simultaneously completely insane and also makes Ashlee look like a God-damned nun. Do you think that Shauna is here to provide a good role model to Ashlee of a grifter who truly commits to the bit? I hope so! Shauna went to jail, Ashlee! If she finds out you returned Drew’s watch because you felt bad about his dead mom, she’ll laugh in your face.

One thing you gotta respect about Shoe is that its cast of bird-people is just obviously crushingly depressed at all times, whether they’re slouching in front of the TV or getting out into nature in an attempt get some fresh air and maybe to feel something. Anyway, the good news is that if the Perfesser and his nephew ultimately die of exposure, the meat in their backpacks will rot before their flesh, so they won’t be too decomposed when the dogs find their bodies. 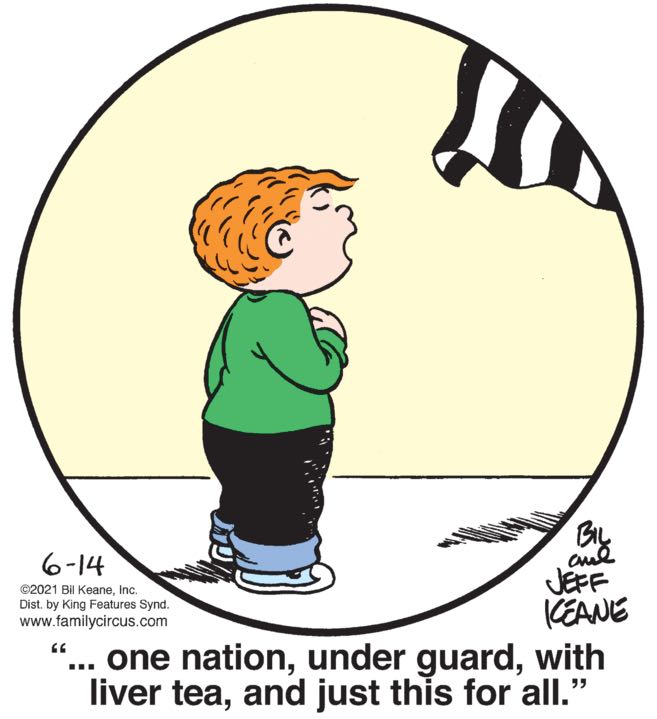 I was about to be outraged by this blatant anti-American parody, but then I realized Jeffy wasn’t pledging allegiance to the Stars and Stripes at all, but rather to the Thin Black Line flag, which honors our referees, umpires, and other sporting officials, so I guess I can’t complain too much.