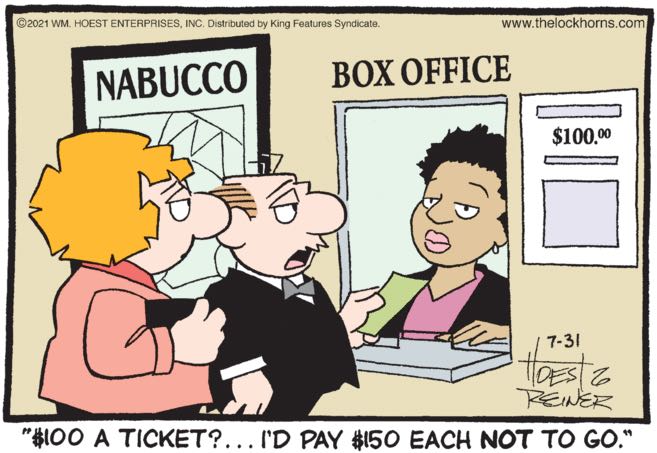 A fascinating thing about longstanding legacy comics is that many of their running jokes are built on cliches pulled from the broader culture at large, and then they keep on using those cliches for decades, even as they completely lose all real-world relevance. For instance, The Lockhorns posits a world where opera still holds a place in the cultural sphere that leads downwardly mobile middle-class suburbanites like Leroy and Loretta to occasionally attend, even if enjoyment of the form is strongly gendered for joke purposes. Maybe this was true in 1968 when this strip debuted, or maybe adults in 1968 had memories that this was true for their parents’ generation, but I would strongly disagree with anyone claiming this is true in the year 2021. Opera today is very niche, and I think its shrinking modern audience is probably a fairly specific slice of intellectual urbanites, and older ones at that, whereas Leroy and Loretta are are somewhere in the 30-50 range (that’s right, folks: with each passing day, Leroy and Loretta are more and more likely to be millennials).

Now, you could probably do a more realistic version of these jokes with “the philharmonic” rather than opera, but, you know what? The Lockhorns has been doing opera jokes for more than 50 years and it’s not going to stop now just because “no real-life version of Leroy or Loretta today would ever be caught dead at the opera” or whatever! And they’re not going to dumb it down for you, either! Did you know that Nabucco was a Verdi opera? I definitely did not! I definitely had to look it up! Is there any other way you would know that it’s opera specifically that Leroy is griping about in this panel, if you didn’t know that off the top of your head? Not as near as I can tell! They could’ve thrown us a bone and used Aida or The Ring Cycle or something ore obvious, but no, if you’re not intellectual enough to “get” this Lockhorns panel or do the research to bring yourself up to speed, then that’s your problem, friend.

“Ha ha! Overswept! But seriously, a child under our care has collapsed into exhausted unconsciousness because she’s done too much manual labor. That seems … not great?”

Sadly, that night an enemy unit was able to ambush the sleeping soldiers of Camp Swampy, killing most and capturing the rest. RIP Beetle Bailey, 1950-2021.