So, Grimm, who is a dog, got his owner/”mom” a “gift,” but the joke is he’s too cheap to actually get her an engraved champagne bucket (?) and instead he stole one (???) from the Sheraton in Chicago, a fairly nice hotel where he somehow managed to stay, despite being a dog, and also cheap? Interesting. Interesting.

The Pefesser, who I have always assumed to be in late middle age at the youngest (not that it’s easy to tell when you’re dealing with a bird-man) is often seen using a crate as a chair. Speaking as an early as a mid-middle-aged man myself, I can say with some confidence that this would be terrible for your back! There’s something particularly grim about it here, as the Perfesser puts the finishing touches on his presumably unsellable book, in what appears to be his large and almost entirely unfurnished attic. 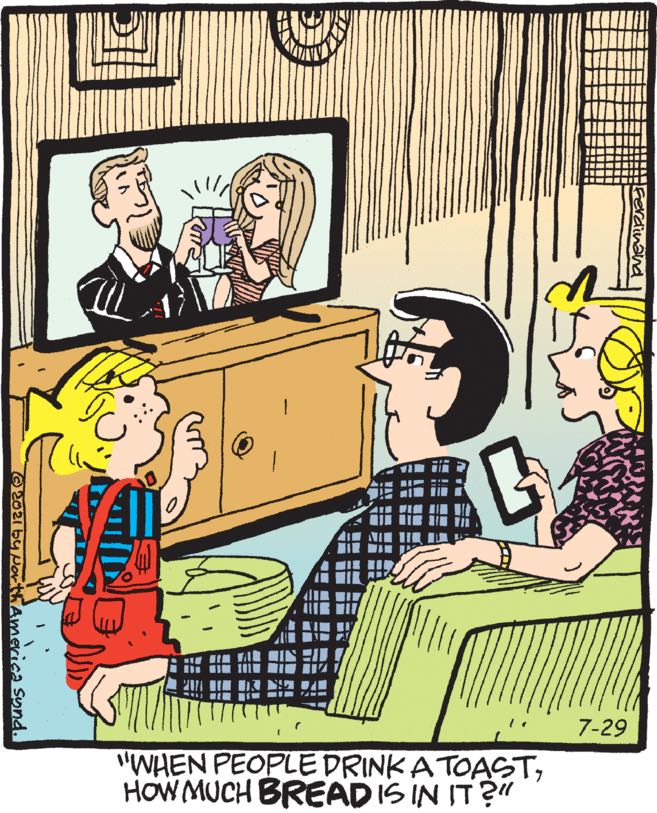 Dennis the Menace appears to have taken a tiny step forward into the modern age by depicting Alice engaging in the near-universal 2020s pastime of simultaneously watching TV and playing around on her phone. Of course, she’s still in a world where her husband is wearing a checkered sports coat while relaxing at home, so let’s not get too excited just yet.