So Nancy finally got herself motivated to put an evil scheme in motion, for certain limited definitions of “evil” and “scheme,” and decided to blow Sarah’s cover about the whole Kitty Cop pseudonym thing, and because there are no murders or political corruption or even fun car chases in the Morgans’ boring burg, the local news is camped out on their front steps demanding an interview. Just in time for Niki to show up with tonight’s dinner! These days, Niki is merely yet another bland teen character in Rex Morgan, M.D., but you might recall that he arrived in the strip as a petty thief who stole June’s purse. Eventually, of course, he was brought to the side of boring goodness when Rex took him on a wholesome, manly fishing vacation. Anyway, I have vague memories that among Nancy’s other crimes, she at one point tried to steal Niki away from Kelly (who also used to be a bajillion times more interesting than she is now), so it would be fun if Niki had gone back to the dark side and is wearing a wire so that he can sneak in to the Morgan house and get an interview with Sarah that will make Nancy rich and the Morgans embarrassed, but “fun” is the one thing this strip doesn’t do so it definitely won’t happen. 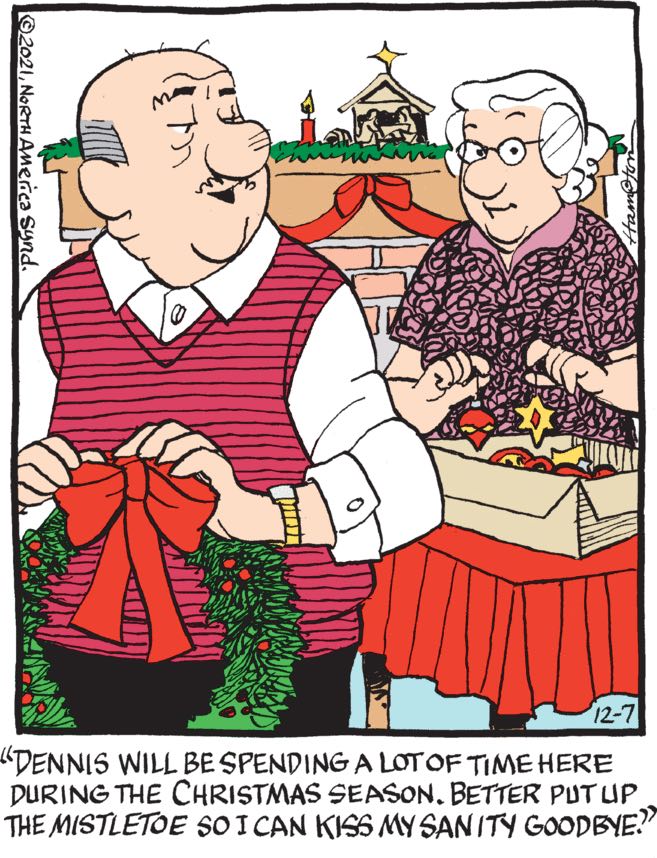 Not sure what’s more unsettling: that Mr. Wilson might be planning to make a crude mannequin out of cast-off objects he has lying around the house, label it “my sanity,” and start ostentatiously making out with it whenever Dennis is around, or the fact that the holiday season means that Dennis will be spending even less time with his family than usual.

Hootin’ Holler! It’s a lawless place where you can experience vicious and arbitrary violence at any time thanks to a generations-old clan feud whose origins are long forgotten and a place where they don’t have fancy high-tech gizmos like “doorknobs”!