This is (and here’s a sentence that I’m reasonably sure has never appeared in the English language to date) the most heartbreaking Hi and Lois yet. Look at Thirsty! He’s doing a half-assed job of tucking his shirt in, he’s writing things down so that when he’s in a meeting he can at least act like he knows what his job is and that he’s doing it. And he looks so happy about it! Maybe putting forth a little effort to meet your responsibilities can make your life better, just like Irma says! Of course, Mr. Foofram is just going to go with whatever suggestion that nerdlinger in the bowtie came up with, which is presumably neatly typed up on that piece of paper that he’s handing over in the background, and this will send Thirsty back into his downward spiral of sloth. But for one brief and all-too-fleeting moment, he’s proud of himself. 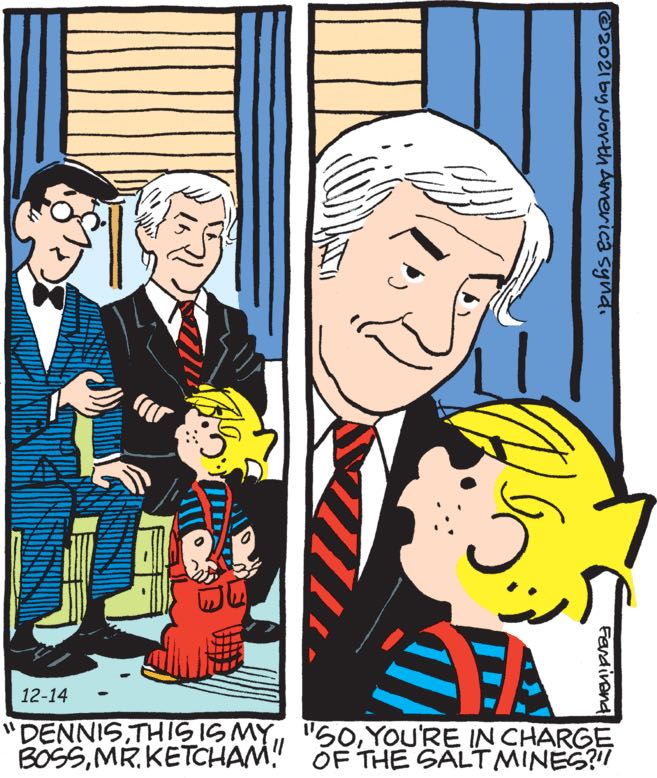 That is, in fact, Dennis the Menace creator Hank Ketcham that Henry is calling his “boss” here, which quite honestly brings up a whole host of existential questions. Is Herny’s generic white-collar “job” actually just to be Dennis’s dad in the strip that bears his name? Does he spend his time in the office being lectured by Ketcham — literally his creator and God — about all the ways he needs to tee up Dennis’s little acts of menace? “Definitely you need to ogle some sexy women in front of the kid this week, Mitchell, and the week after that I’m gonna want you to talk shit about an acquaintance of yours right before they come to visit. You can’t say no to me, I called you forth from the ether with my pen and I can send you back!” The fact that Ketcham has been dead for 20 years just complicates this scene further. It’s almost as if Henry is finally about to explain who’s really calling the shots in this strip, and why despite the best intentions of everyone involved in its creation today, the Mitchells will be trapped in their narrative hell for eternity.

Oh my gosh Rex said a swear!!! June is shocked, for obvious reasons: generally people are driven to profanity when they experience an emotion of some kind, something that she knows Rex tries to avoid at all costs.