You ever stare at a sentence for a long stretch of time and become increasingly convinced that it doesn’t really make sense as something a native speaker of 21st century American English would say? Probably not, as you don’t have a semi-successful comics blog you’ve got to churn out content for every day, but the point is that “How much are you wanting?” fell into that category, for me, until I finally convinced myself that it would sound right if it were in a comical fake Irish accent from an old-timey movie. “How much are ye wanting then, lads?” See, doesn’t that sound better? Or at least funnier? Wouldn’t it be funnier if Dagwood spoke in a comical Irish accent? Have I finally cracked the code necessary to read Blondie every day and find it funny, after all these years?

“Is that why your face is constantly immobile, your mouth perpetually in an O of surprise? The price of beauty is wearing a dead mask, every day of your life?” 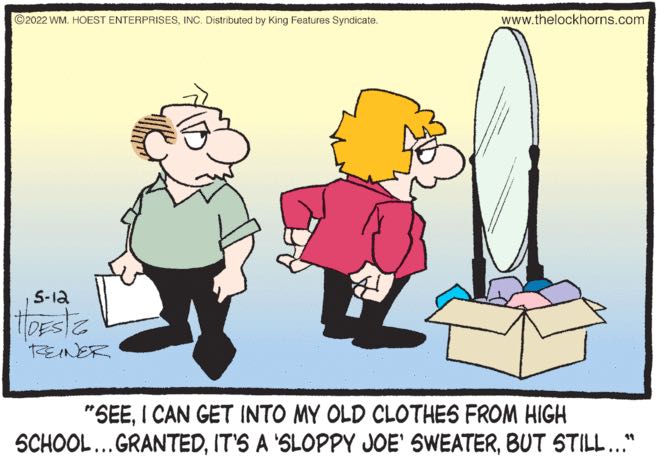 The long, unkempt beards of Greek philosophers were meant to signify that they were so invested in the life of the mind that they couldn’t be bothered to concern themselves with ordinary, quotidian matters like hygiene, and in the early 20th century, many men at Ivy League colleges indulged in a similar aesthetic impulse for similar reasons, making a vogue out of a disheveled, slovenly style of dress. In the 1940s, students at the elite women’s colleges cast off their girdles and began to imitate their male counterparts, and a key part of their new uniform was a baggy cardigan referred to as a “sloppy joe sweater.” This is a long-winded way of me saying that fine, I admit it, I was wrong, the Lockhorns are definitely not Millennials.