Look, folks, I’ve never claimed to be particularly “baseball savvy,” so I apologize for failing to follow Saturday’s disjointed jargon about Ryne Duren. (Just as a side note, faithful reader/Twitter follower Windier E. Megatons pointed out that Ryne Duren is a classic guy for the Let’s Remember Some Guys genre of sport talk, which you’d think Gil Thorp would engage in more often.) Apparently the point was not that “You should get better glasses, like Ryne Duren did” but rather that “Now that your opponents know your vision is poor, you should ham it up and make it seem like you have very little control, like Ryne Duren did, so that they’re terrified you’re going to ‘accidentally’ murder them with a fastball to the face, something that a coach at the high school level would definitely just let happen.” Remember, kids, using a series of elaborate coded signals to compensate for your disability is the pusillanimous tactic of an effeminate coward and violates the rules of baseball. But pretending to be a true psycho/major legal liability for your school district? That’s all the game, fellas.

A thing that I have noticed in my many years of Slylock Fox studies is that a great many of the “mysteries” simply involve a sapient animal who has been caught in some wrongdoing offering a transparently false alibi that Slylock easily sees through. Today it occurs to me that one of the things that distinguishes humans from (present-day) animals is our ability to imagine counterfactuals: ways that events could have, but did not, play out, or, alternately, explanations that we know to be false for actual events. Perhaps part of the great Animalpocalypse was the non-humans’ sudden ability to dream up counterfactuals of their own, but being so new to them, they find them difficult to refute. Only Slylock, one of the wisest of the new breed of animals, is able to keep is bearings on reality in this brave new world. 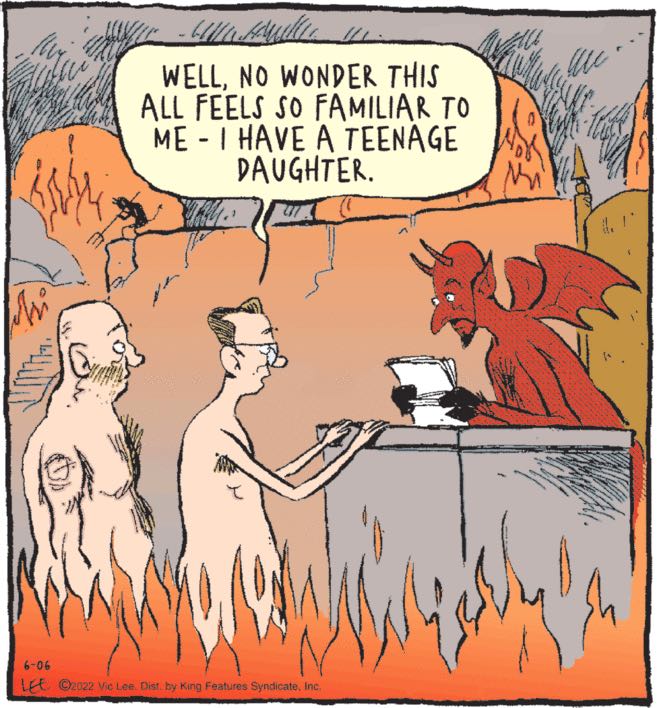 The comics pages are a small-c conservative institution heavily invested traditional institutions like the nuclear family. Only truly radical strips like Pardon My Planet are willing to speak the unpopular truth: raising children is exactly like your soul being condemned for your sins and tortured forever, in hell.