You know I am loath to say anything positive about the syndicated comic strip Marvin, but I have to say that I’m reasonably impressed that the strip is acknowledging that someone who is the parent of an infant and still in the early-to-mid stages of male pattern baldness is not, in fact, of an age to have attended Woodstock, or even Woodstock ’99, but rather would be one of those darn millennials we hear so much about on the news these days. By giving her husband’s exact age, Jenny really opens up a lot of information about his personality. Like, we’ve confirmed that, assuming we’re not dealing with some kind of Doogie Howser situation (and based on his demonstrate intellectual capabilities, I have zero reason to believe that we are), Jeff was in college at the earliest from 2005 to 2009, a full five years after “Who Let The Dogs Out” was released and a full four years and nine months after it had entirely worn out its welcome with literally everyone, meaning that he put it on that college mix CD as an ironic bit. He’s always been terrible, in other words, as further demonstrated by the fact that he’s now buying a turntable just so he can recreate that bit, which would’ve probably been only mildly annoying to the people in his dorm, for his family, who will absolutely hate him for it.

Think about the stuff that we actually see in Rex Morgan, M.D. Can you imagine how boring this dude’s “story” must’ve been to just be completely elided between today’s strip and yesterday’s? Dude’s been grievously insulted by the narrative structure he’s embedded within, and he’ll never even know it. 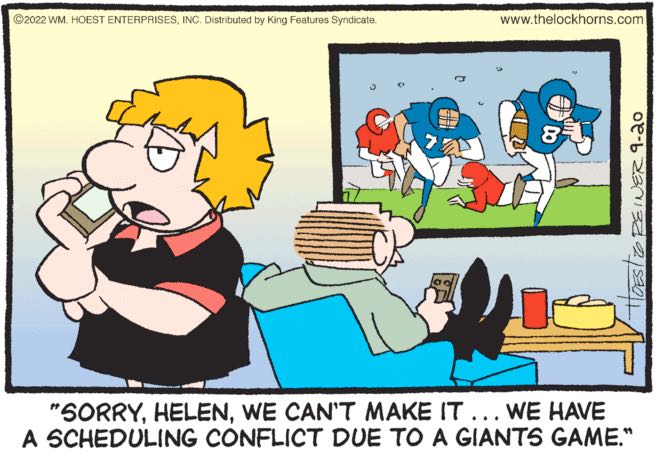 God damn it, Leroy is an obsessive Jets fan, not a Giant’s fan. Do I have to be the unpaid keeper of the lore for all of these strips now???