Are we all disappointed that Wilbur didn’t somehow make a spectacle of himself at Iris’s wedding? Yes, of course. But today we at least get a little consolation prize, which is learning that Wilbur made peace with Iris “in his heart,” which I take to mean that he did not make peace with her “in a conversation in which he apologized for his various misdeeds.” And why would he, since doing so would ruin the “bad boy reputation” that will draw Iris back to him once she and Zak inevitably break up!

You know, despite his occasional drunken implosion or jealous rage, Wilbur is actually a fairly cheerful and optimistic guy. Why wouldn’t he be, after all? He shouldn’t be alive, but he is! Everything after this point is just gravy! 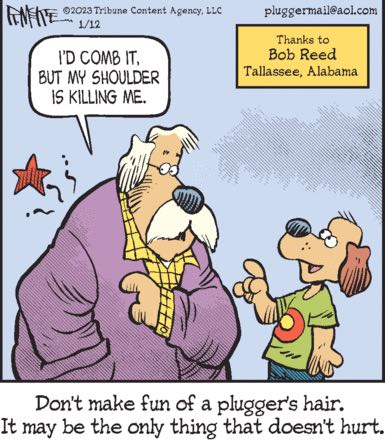 Ha ha, it’s funny because pluggers are in too much physical pain to perform even basic grooming tasks, because they’re old and decrepit!