[extremely science nerd voice] Excuse me Tony, but while it is true that Mercury experiences temperature extremes, the theory that you seem to be referencing here, that one side of the planet is always pointed at the sun and the other always pointed away, was disproved way back in 1965, as anyone who actually watches the Science Channel would know and … oh, no, I’m wasting my life.

[extremely newspaper comics nerd voice] Excuse me, but everyone who reads this strip knows that Jamaal actually lives upstairs from a laundromat, so it would be highly illogical for him to refer to a “neighborhood” laundromat when he could just wash his clothes and annoy women in his own … oh, no, I’m doing it again. 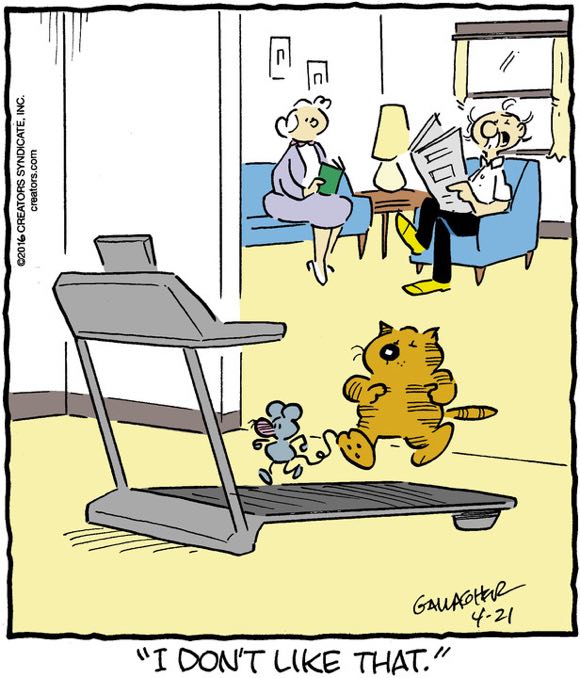 I honestly think that “I don’t like that” should replace “I’m thinking of unfriending him on Facebook” as the go-to punchline for every Heathcliff ever. It’s less specific, but I guarantee it will literally always make sense.

Let’s skip over the tired husband vs. mother-in-law banter here to point out something very sad: Herb is walking around his own home with a cardboard box full of forlorn knicknacks that’s just labelled “my stuff.” Does he not have even a shelf of his own where he can stash his lamp and his … smaller lamp, and his, uh, is that a book, maybe? Or another box inside the bigger box? Anyway, the point is, Herb as a vagabond within his own house, going to bed at night hugging a pathetic box of stuff because he’s afraid someone’s going to take it from him, is much fuller of narrative pathos than Herb’s mother-in-law implying that he’s trash or whatever.

It’s come to our attention that you didn’t really get the message when we named Godiva’s rival “Worbell Trilling.” We wanted to name her “Whorebell,” but the syndicate it nixed it. Anyway, she’s the queen of tramps! Just to make that clear. She also looks exactly like if Godiva got zapped with some kind of face-shrinking ray?

I absolutely love Rex’s dubious expression in the last panel here. It’s as if he’s only just now realizing his family and friends have spent the last three years feeding his daughter’s megalomania. “An extravagant museum gala? For my six-year-old daughter? That, uh … that might … huh. Huh. Well, probably too late to anything about it now, but … um.”

Just some helpful tips for new rabbit owners here! Do try to convince them to poop in a box! Don’t try to get them to barf, they’ll never do it! Definitely don’t try to get them to have sex with hares, that’s a whole different animal and that’s gross and wrong. Just try to sleep at night thinking about how their front teeth are growing, always growing, leading to an insatiable need to chew chew chew CHEW. You probably can’t!

Unlike what appears to be a surprising number of you, I don’t care much about the weird chronological disconnect between Funky Winkerbean and Crankshaft, where both strips take place in the present (as near as can be determined by technological and social details) and yet Funky Winkerbean takes place ten years after Crankshaft. I really don’t care at all! It’s just Comic Book Time, y’all, and unless you’re dealing with For Better or for Worse or Doonesbury, you just accept that the characters all stay the same age more or less while the universe ages around them. The Funkyverse seems to want its readers to care about the discontinuity, though, which is strange because literally the only forms of “caring” anyone could have about this are “confusion” and “irritation”; still, what other explanation is there for the slo-mo crossover details that would only be of interest to Funkyverse obsessives? Like those twin girls who recently surfaced in Funky Winkerbean as teens are now back in Crankshaft, teasing us with potential clues about their birthdate! (Jokes on you, nerds: October 1995 is before they were born whether Crankshaft takes place in 2016 or 2006.) Meanwhile, in Funky Winkerbean, the gang is visiting the Valentine, presumably to show us that Max and his girlfriend have managed to run it for a decade without going bankrupt. I guess that’s supposed to be Max? Or some other bearded dude? At least he’s making a dumb play on words based on a phrase nobody ever uses. At least something makes sense.

Is there a phrase more emblematic of Mary Worth’s ethos than “Mary explains what Dawn is feeling”? Anyway, now that Mary has successfully annihilated Dawn’s emotional autonomy, she’ll be ready to force her puppet to make a “bolder personal effort” for “in-person connecting,” which probably will entail an assassination attempt on a senator or businessman opposed to Mary’s interests.

Normally I would just pass over this incomprehensible punchline like so many others in Crock, but the title character’s knowing glance in the final panel is really forcing me to dwell on it. “Eh? Hairy backs? Get it? His back? It’s hairy?”

You know those Slylock Fox puzzles where the solution revolves around someone making a technically true but misleading statement to beat a lie detector test? This reminds me of a particularly pathetic version of that. “Heh heh,” thinks Herb smugly in the final panel. “I sure gave her a piece of my mind, in a way that guarantees that she’ll never notice! That’ll show her!”

WOW, when is BIG GOVERNMENT going to get OFF THE BACKS of JOB CREATORS who want to MAKE THINGS IN AMERICA by HIRING OLD PEOPLE and NOT PAYING THEM ANY BENEFITS because they’re ALREADY ON MEDICARE AND SOCIAL SECURITY????? Man, whichever local state legislator had his or her last campaign entirely financed by the Spencer-Driver SuperPAC is going to hear about this.