Well hello there, Random Mustachioed Dude Who We’ve Never Once Seen Before In This Feature! The title characters are on a break from their usual hilariously nonspecific antics (Jamaal was available for his contractually obliged appearance in the second panel), so why not just wander in and thought balloon folksily about something or other? That sounds like good cartooning right there!

It’s possible that RMDWWNOSBITF is setting up some no-doubt fascinating story about adoption or something that is really dying to be told in this feature; such a narrative would obviously require a new character as a protagonist, since no one would want to disrupt the lives of the existing Herb and Jamaal crew, who operate like a well-oiled machine of hilarity. On the other hand, if this fellow is just going to show up one day, muse silently about this strange journey we call life, then wander off, never to be seen again, I will have gained a certain respect for this comic. 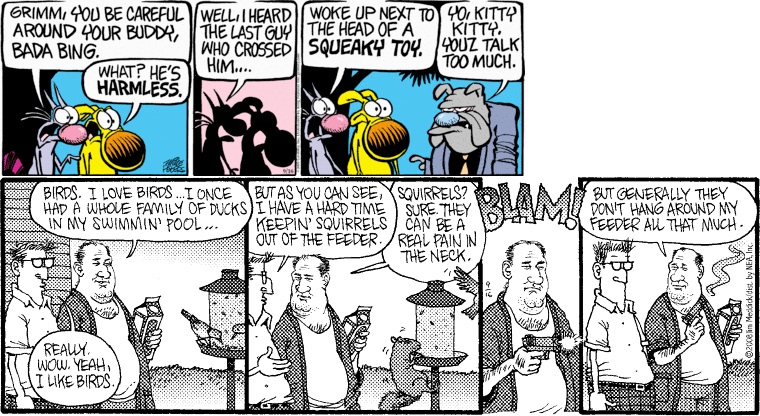 Monty (a strip that I never talk about here, but for which I harbor a certain affection) and Mother Goose and Grimm have both decided to launch into a series of painfully unfunny Sopranos jokes this week. And, really, why not. It’s the 1.25th anniversary of the show going off the air this month, so it’s more topical now than ever.

This strip, with its endless television-watching, whining, flu infections, and wholly accidental plot resolutions, can sometimes be a little too intense for newspaper readers. That’s why it’s important for Spidey to take a break every couple of weeks or so and just recap the plot for nobody in particular. Whew, I feel calmer already!

Damn you, Alan, I’ve sat idly by long enough while you spiraled downward into dope-fueled madness. Today, though, you crossed the line. Why do you denigrate booze? What did sweet, sweet liquor ever do to you? Getting drunk is a lot more than “better than nothing,” OK? It’s how humans have been altering their consciousness long before you and your fancy narcotics came along. Hey, don’t you just drop the thought of getting drunk on the job because you think there might be drugs somewhere around there! Are you listening to me? Oh my God, he’s a monster!