Hey all! The strain of posting new strips all Thanksgiving week meant that I haven’t been able to keep up with the week’s comments, so I’m going to let Red Greenback’s genius stay up for another week. New comments of the week (including the few I socked away from this past week) next Friday. However, I do have a few items left for your edification: 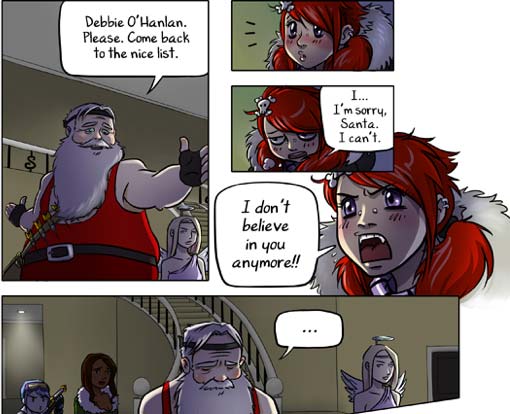 First off, if you haven’t pre-ordered Santa vs. Dracula, the upcoming graphic novel from Ed Power and Melissa DeJesus of My Cage fame, now (and by “now” I mean “by midnight Eastern Time Sunday”) is the time to do it! They’re very close to reaching their goal, but need just a few more orders to get over the top. I’ve pre-ordered mine! Help make this project happen! 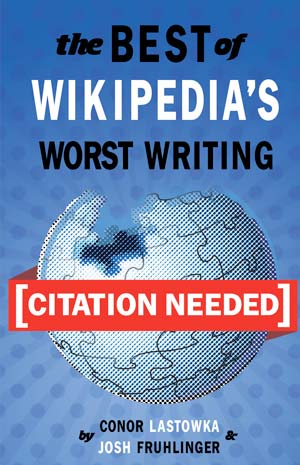 But Santa vs. Dracula won’t ship until sometime next year. If you need a present for the upcoming holiday season, obviously you will want to buy [Citation Needed], a collection of the best of Wikipedia’s worst writing that Rifftrax writer Conor Lastowka and I culled from our our blog. OK, yes, you probably have heard this all before, but this weekend Amazon’s mysterious algorithms put the book on sale for who knows how long, so perhaps you want to take advantage of that? Or, if you only do your shopping in person and happen to live in or near Baltimore, Washington DC, or San Diego, head on down to Trohv (in Baltimore and Takoma Park) or Progress South Park (in San Diego), ’cause the book’s there too!

Next, I must confess that my bird-banding record-keeping has gotten shabby during some chaos over the past few weeks. I have a nagging feeling that there are several of you to whom I owe bird bands but who I haven’t sent them out to yet. If you are one of those who contributed during the fund raiser (or who just put some cash in my tip jar over the past few weeks) but you haven’t gotten your band, please email me at bio@jfruh.com with your mailing address and I’ll get one out to you!

Finally, must give thanks to our advertisers:

Good evening everybody! Your COTW in a moment, but first two items of interest! First of all, I know many of you fondly remember the now-cancelled My Cage strip. Well, the two creative minds behind, Ed Power and Melissa DeJesus, are cooking up a new project: a graphic novel called Santa vs. Dracula! It’s about, well, pretty much what you’d think, based on the title. You can help them get it off the ground by pre-ordering through Kickstarter! Click the link to see some sample pages. You know you want it!

Also! You have of course already been made aware of [Citation Needed], the exciting new compilation of the best of Wikipedia’s worst writing by Conor Lastowka and myself. But perhaps you are thinking “Feh, I only purchase goods and services that are endorsed by John Hodgman and/or Rob Bricken of Topless Robot fame.” Well, get your wallet, my friend.

“Mountie McQueen is just following strict Canadian law enforcement protocol. He jumps out from behind a tree and shouts ‘Surprise!’ It’s kind of their version of Miranda rights.” –geekwhisperer

And the runners up … very funny!

“Since there are no trees in sight, where exactly did that beaver get those branches? Unless it’s actually chewing on moose bones — in which case this scenario is far more horrifying than anyone imagined.” –BigTed

“I love the befuddled expressions on Jughaid and Snuffy. It’s like one of them is going to break the silence by saying ‘What we gon’ say when we git our pichure tooken?'” –Red Greenback

“‘Really? Aren’t you younger than Daddy?’ ‘Yes, dear, but I’m his trophy wife. You, on the other hand, aren’t anybody’s trophy anything, unless there’s an award for worst outcome of finding the condom box empty.'” –seismic-2

“You can tell Rick works in the music industry — what with his powder-blue Members Only jacket and regular boy’s haircut, he’s practically 50 Cent’s twin!” –Patrick

“As we all know, when it comes to songwriting, quantity is what matters. Tommie doesn’t wonder whether her songs are insipid, predictable, tuneless variations on the theme of hoping the right man with a neckerchief comes along someday, or how will she be able to know her true love if his hair is the same color as another man’s; she wonders whether she’s written enough of them. And Rick’s like, ‘…yeah, sure, let’s go with that. Not enough songs.'” –Yahtzee

“I find it makes a considerable difference to assume that whenever Mary has a hand in a relationship, either by giving advice or by directly involving herself without warrant, she dictates that the couple refrain from any sexual activities until she alone has given the go-ahead. It would explain all of the facial expressions anyways.” –R Felix

“Judge Parker: I thought you guys said Sophie was in junior high? Why can Derek drive? Why do I kind of think he’s cute JUST KIDDING LALALA I DIDN’T SAY THAT” –twg

“Oh, right, like Mary Worth goes to that diner for the pie and not for the emotionally crippled staff.” –Lolsworth

“Chip has downloaded the ‘Grammatically incorrect past-tense verb’ app, the ultimate in parental-annoyance technology. ‘BROUGHT, you ignorant son of a bitch!’ is all Hi will be able to think for the next three weeks.” –Doctor Handsome

“I worry about Bobby and Gina growing old together, though. If they can’t see over the steering wheel NOW, what hope do they have of driving off into the sunset when they’re eighty? Too small for cars, too fragile for skateboards: it’s a disaster waiting to happen.” –Krazy Kat

Thanks to all who put some cash into my tip jar! And this is where we’d thank our advertisers — if we had any this week. To find out more about how you could be thanked in this spot, and more about sponsoring this site’s RSS feed, click here. 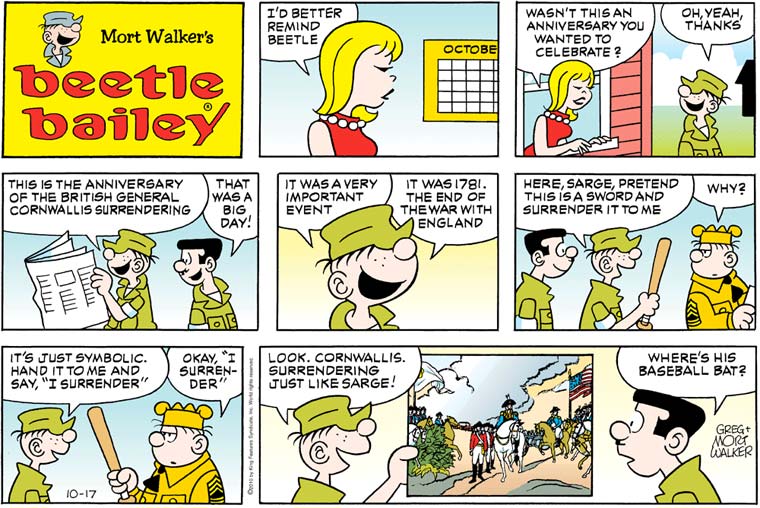 Sunday Beetle Baileys are notorious for being flabby and shapeless, with an absence of rhythm that guarantees that any possible fun is sucked out of it, but today’s is pretty much one of the worst I’ve seen. I’m not buying the idea that Beetle, who typically can’t even be bothered to push his hat out of his face, has suddenly developed a love for American Revolution trivia. And the weird ritualistic baseball/”surrender” exchange has so little payoff — one would expect that Beetle would use Sarge’s surrender to get out of work, or beatings, somehow — that Sarge is absolutely right to look as bored as he does. About all this strip has going for it is the reminder that Miss Buxley’s little black dress is actually a little red dress, colored black for the demands of the black-and-white daily strips that we increasingly often see colorized. 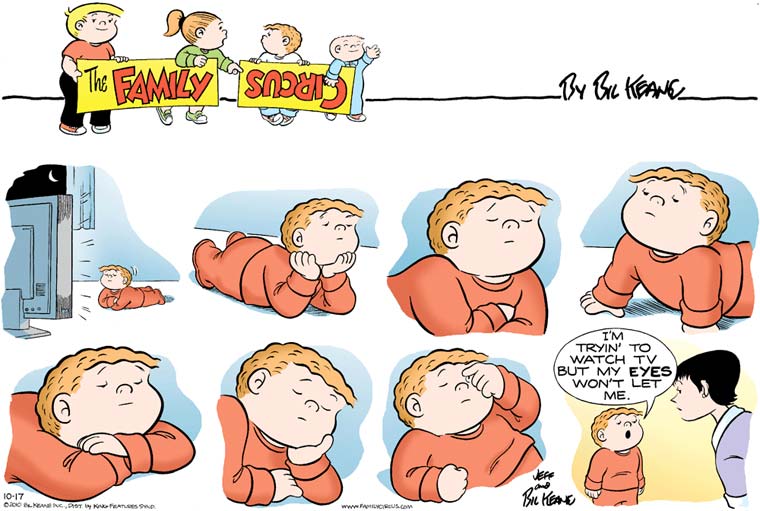 Look, Jeffy, here in America we watch TV five hours a day. If you can’t hack it, maybe you should go to Communist Russia, where they’ll let you read books or some garbage like that.

This is getting a bit self-indulgent, but I did want to make sure that Curmudgeon readers who got shout-outs here and who rely on the no-Sunday Strips Houston Chronicle for their comics got to see their names in lights. What I want to know is, why no animal-style names for us? I dare you to come up with an animal-pun version of “Fruhlinger.”