“OK, Josh, we get it,” you’re saying. “Rex Morgan and Doctor Troy are gayer than two cowboys who have surreptitious man-on-man sex with each other in a tent, then move to Massachusetts, get married to one another, open an interior design firm, and serve on the board of directors of the local chapter of GLAAD! But what I really want to know is, what’s going on in Mark Trail?”

Well, I’m glad you asked. When last we checked in on this plotline, “You’re My Lawyer” Blake had been charged with figuring out a way to get the local government to use its power of eminent domain to allow a shady developer to build a road through Lost Forest to his shady casino. What with the Supreme Court’s recent decision about the potential scope of eminent domain, it seems that Blake should be getting to work wining and dining local officials, making sure backs are scratched, and lining up votes, maybe with the help of a kickback or two from his bald-headed boss’s deep pockets.

Instead, he’s placing calls to explosives-wielding miscreants seeking to hire them to blow up the existing road, which, in the it-totally-makes-sense-until-you-think-about-it-for-thirty-seconds world of Mark Trail, will force the government to build an entirely new road to the casino. The flaws in this scheme are too numerous and glaring for me to bother going into, so I’ll content myself with asking the following: did the Bald Baddie really need a lawyer to do this? Surely he has any number of (no doubt bearded and/or sideburned) thugs on retainer who would make the necessary illicit road-demolition arrangements. If there’s one thing I’ve learned from watching mob movies, it’s that even the boldest criminal enterprise tries to keep its lawyers from actively participating in criminal acts.

The person to watch in this drama (such as it is) is clearly Baldo’s creepy, affectless grandson Tony. We’ve been told that he’s been “having a hard time” since his parents died in an auto accident, yet he’s showing an unseemly interest in watching the road get blown up — just the sort of thing that could make more little boys and girls wards of their sinister grandfathers. Clearly Tony’s loss has destroyed whatever sense of right and wrong he once had. I’m looking forward to finding out just what it is that’s going to make him snap and turn into an unstoppable pint-sized, tousle-haired killing machine.

Meanwhile, here’s a few other things of note that happened in today’s funnies:

Spider-Man, Family Circus, and panels from Curtis, One Big Happy, Get Fuzzy, 3/14/06

As the drama of the fake Spider-Man grinds on, we learn that the Spider-Suit does carry with it one Spider-Power: Spider-Self-Narrative! The relative inability not to verbalize one’s thoughts of a spider!

This panel is noteworthy because, as Curtis’ dad heckles Curtis, his fingertips (or possibly forehead) actually emit the sound effect (stage direction?) “Heckle!” I find this technique pretty charming (much more so here than the last time it was used).

I should also make it clear to all of you that the today’s Curtis is nowhere near as filthy as the dialogue in this panel might lead you to believe.

Also, today’s One Big Happy, Family Circus, and Get Fuzzy are about vomiting, urinating, and eating something unidentified that is almost certainly vomit or feces, respectively: 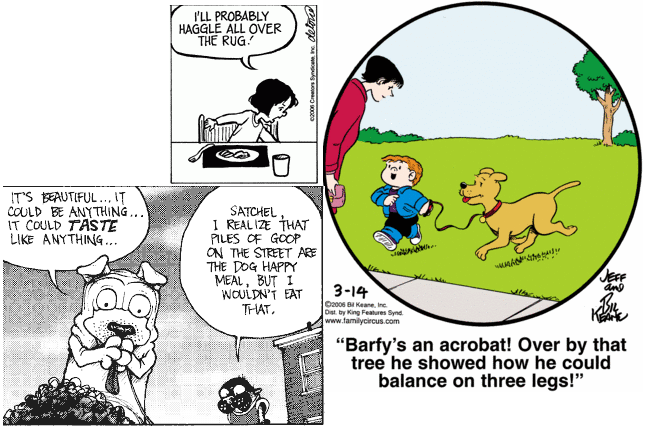 Actually, now that I think about it, the Family Circus is vaguely about vomit as well, since it reminds us that the family dog is named “Barfy”, which strikes me as the sort of name you earn, if you know what I’m saying.